Suomenlinna Fortress is one of the islands in the Baltic Sea that surround Helsinki‘s harbor.  When we told a Finnish gal that we were going there, he said “it a great place to shoot Russians from.”  Historically, there has been more than a little tension between Finland and its close neighbor, Russia.

In the mid-1700’s, Russia under Peter the Great was rising as a power.  Pete had just built a shiny new capital called St. Petersburg nearby and had his binoculars trained on the west.  Sweden built the Suomenlinna Fortress (christened Sveaborg by the Swedes) with French financial assistance to address the threat Pete posed. 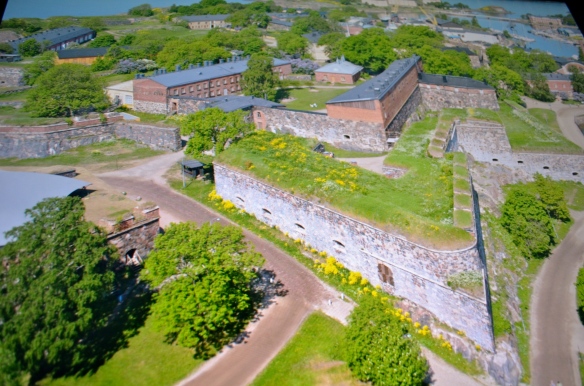 The second largest or of its type (after Gibraltar), it is a serious fort to counter a serious threat.    When it was built, it was high-tech and a big deal.  It had the world’s largest dry dock, over 5 miles of walls and hundreds of cannons.

We checked out the museum to learn a little about its history (there are several others on the island, but the weather was so good that we wanted to be outside).  There, about defenses and battles.  In 1808, the Russians came, led by Alexander I, who had colluded with Napoleon, and began bombarding it (see below).

When no Swedish reinforcements arrived, the Russians took the fortress, occupied it, and called it Viapori.  The Finnish war ended with the Treaty of Fredrikshamn under which Sweden ceded Finland to the Russian Empire in 1809.  Part of the reason Finland is an independent nation today is because it became an autonomous grand duchy within the empire. 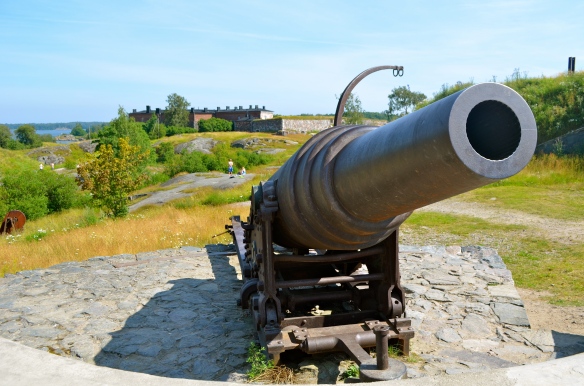 The Russians expanded the fortress, building extra barracks, a bigger dockyard and extra fortifications.   The English and French tried unsuccessfully to take the fort during the Crimean War.  Unfortunately, they only succeeded in damaging it.  Fortunately, the damage was repaired after the war.  In the build-up to World War I, the Russians used it as part of its defenses to designed to safeguard the capital, St. Petersburg. 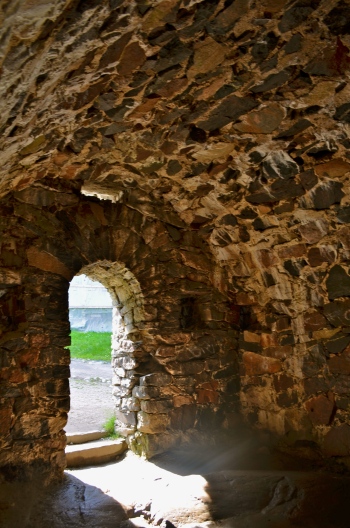 Following the Russian Revolution in 1917, Suomenlinna became part of an independent Finland.  Later during and after the Finnish Civil War, the island held a prison camp.  The island’s museum has artifacts from, paintings and photos of all these events. 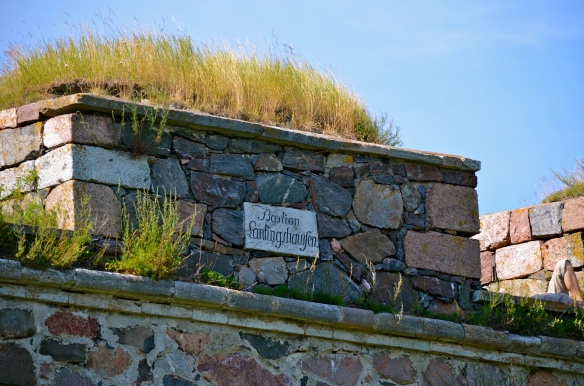 Today, Helsinki’s Suomenlinna Fortress is more than just one of the largest maritime fortresses and a UNESCO World Heritage site.  It’s a cool place to hang out.  It’s only a fifteen minute ferry-boat ride from the center of Helsinki. 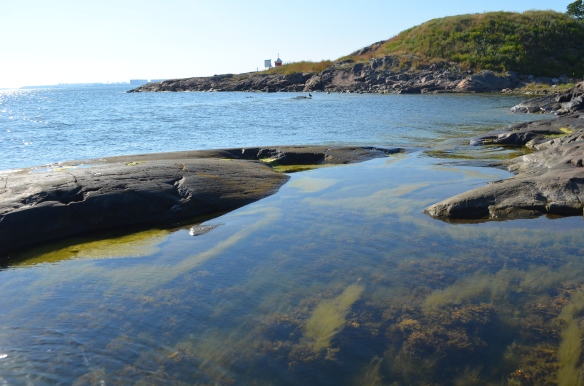 We wandered around the grounds and scampered on the rocks, enjoying the sun, picnicking and taking pictures.  While taking this one, I slid on the slick rock and fell into the Baltic (thank goodness the camera didn’t go under.  He sat there and laughed at me trying unsuccessfully to scamper out on the algae covered rocks.  Unfortunately for me, he wasn’t the only one.  Suomenlinna is the place to hang on a nice summer day.  We saw Finns lazing on the rocks and picnicking in sunny fields.

The island is home to 850 residents, who have a pretty cool little town.  There’s a nice brewery, a bar, nice cafes, and a general store.  Many of the residents are artists who sell their wares on the island.  I bought a beautiful pair of earrings that were way cooler than their relatively inexpensive price tag.  The island is especially relaxing because there are barely any cars on the island, although I hear that people used to be able to get to Helsinki via snowmobile in winter.

We explored the ancient fortress walls and tunnels, checked out the rusty cannons and peered through the gun holes.  There’s a submarine from the cold war to tour and the museum.  The island also houses military barracks. 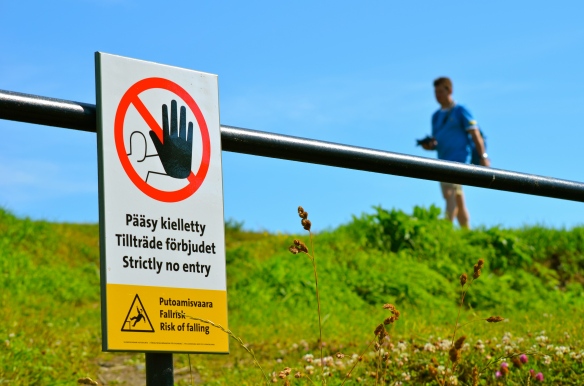 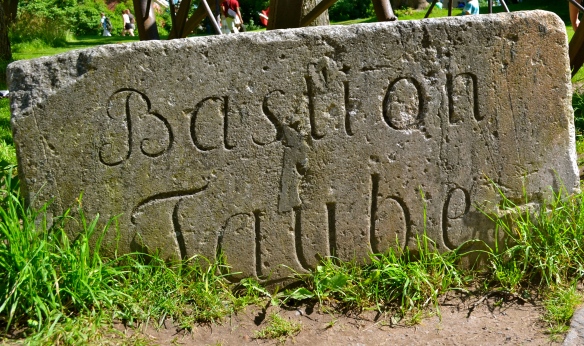