While in Bad Kreuznach, Germany we saw giant structures on the side of the road.  They were 9 meters (27 feet) high and looked almost like walls.  We wondered whether they were for flooding, remnants of ramparts or used for something else.  It turns out that they are Saline graduation towers, structures used to produce salt by removing water from Saline solution via evaporation.

The towers are made from a wooden wall-like frame stuffed with bundles of brushwood (typically blackthorn).   The Nahe valley has many salt springs. Salt water from them runs down the tower and partly evaporates, leaving minerals behind on the twigs.  The water in the bottom has a higher salt content (as a result of the evaporation). 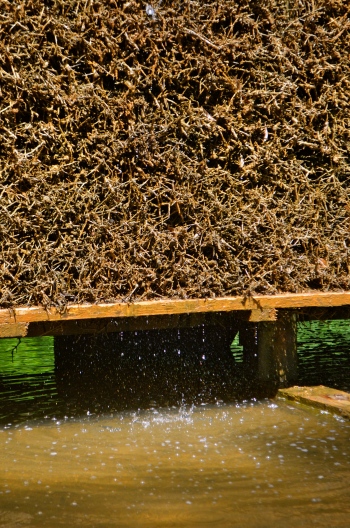 We’d never seen these before, but apparently they are in spa towns in  Germany, Poland and Austria. Our friends told us that the air around them is beneficial and people with lung problems flock to them like they do to the seaside.  The salt water (for both inhalation and bathing) remains a remedy  for rheumatic diseases, asthma and skin conditions.

Of course, we had to check them out.  We hiked through the Salinental valley from Bad Kreuznach to Bad Münster to see them.  They were pretty sweet.  You almost got a high from breathing in the air.  It had a salty, tangy, fresh smell, kind of like the ocean without any fishy odors.  The area around the towers felt cool and it was very refreshing.

The Kurpark gardens are billed as Europe’s largest open-air inhalatorium, they offer private salt rooms and spas on site. saline nebulizer, the thermal baths and a number of rehabilitation clinics.  Saline nebulizers  spray a fine salt mist into the surrounding area.  The saltwater droplets are then breathed deep into the bronchial tubes.

We walked along the water to adjacent Bad Munster.  Although there isn’t a ton besides campers and more spas in Bad Munster, it was beautiful.  It was so beautiful that Turner even painted it.  In 1844 while exploring the smaller valleys of the Rhine, he painted the castle of Ebernburg from the Valley of the Alsenz (click here to see the painting or go see it at the Tate in London). 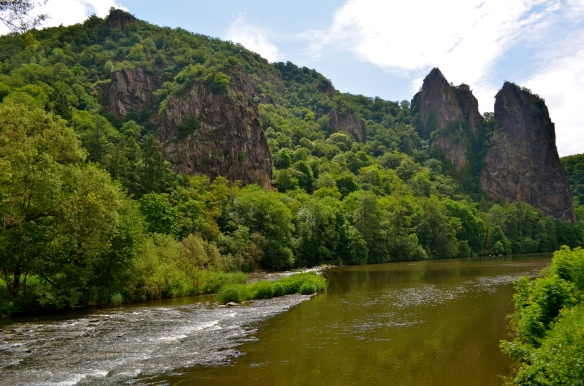