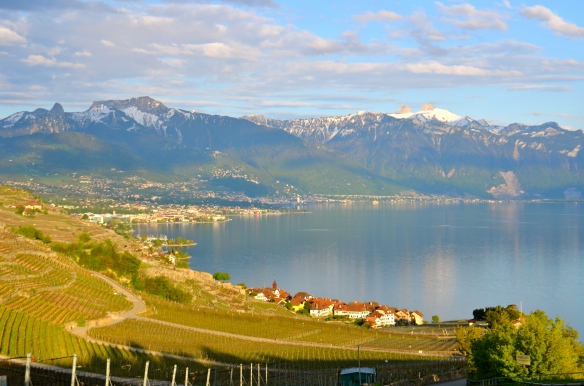 Rochers-de-Naye is the mountain with the rock top on the left, not the bump, but the one with the snow below the rock.

We woke up to a beautiful day. Since it was so clear, we decided to do one of the things that we’d been saving for a clear day so we could enjoy the view.  Our choices were take cable cars to the top of Mont Blanc or hike from the lake in Montreaux to Rochers-de-Naye.  I checked with him to make sure he know the hike meant climbing the mountain behind Montreaux.  Please note the full disclosure (on my part) and assumption of risk (on his part). 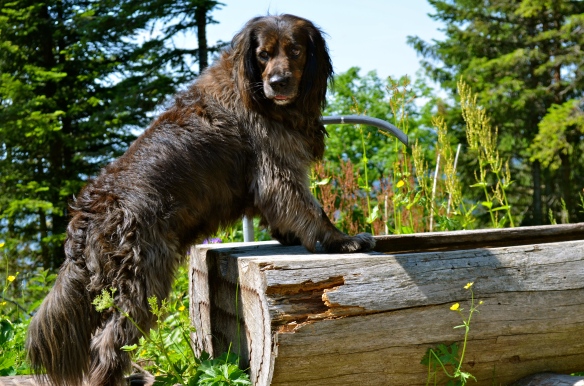 We weren’t the only ones who thought it was hot. This guy jumped into the water fountain.

A reader suggested this hike and I wanted to do it because the views at the top are spectacular.   Yeah, we could have taken a cog wheel train up, but where’s the fun in that?  Especially on a hot day? 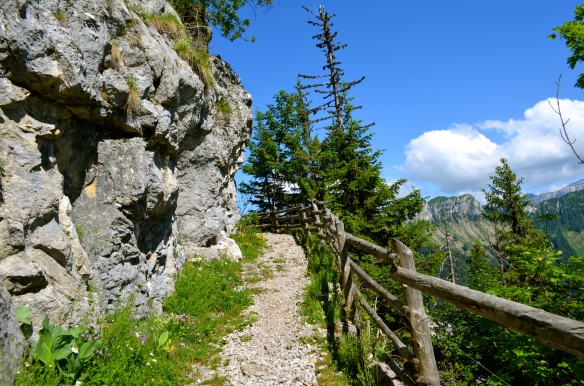 We spent about five hours…walking up, and up, and up. 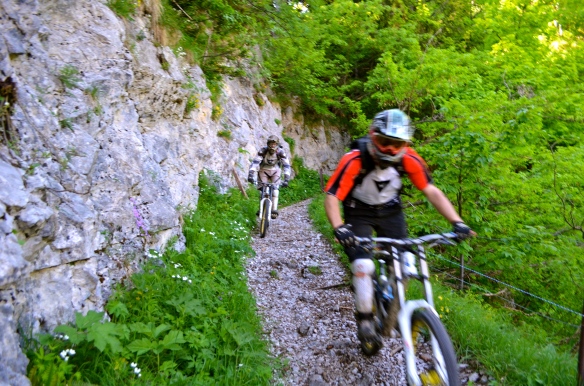 On the way, we saw these brave fellows heading down.  In this photo, you can’t see what is beyond the edge.  In fact, it’s almost impossible to see from this vantage point.  That’s because it drops off sharply and precipitously.  If you look on the right of the photo below, you will see a small railing that prevents people falling from the steep rock face.  Yep, that’s where we ran into them.  Impressive. 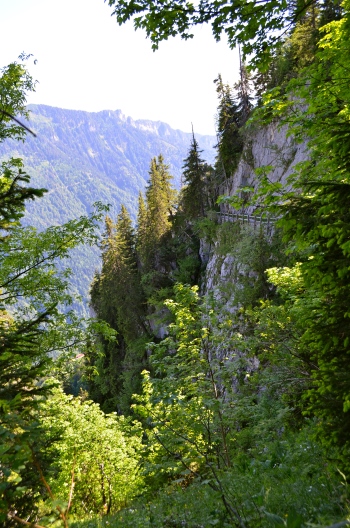 I’ve always wanted to do a ridge hike in Switzerland.  I thought it would be cool to  look down on both sides.  This trail had a bit of one.  Cool huh? 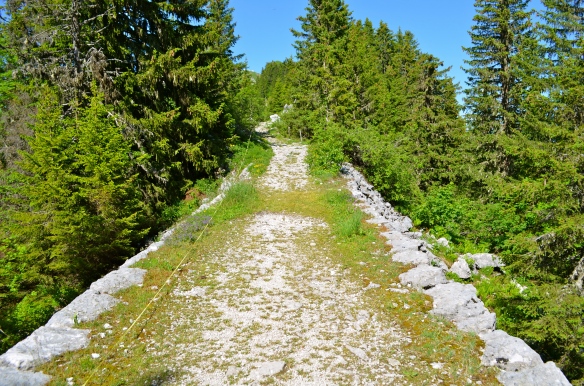 At the end of the ridge, we finally caught sight of the summit.  Although it looks pretty close, it took us at least another 45 minutes to reach it.  I may have slowed us down by stopping every 10 feet to take pictures of the incredible scenery. 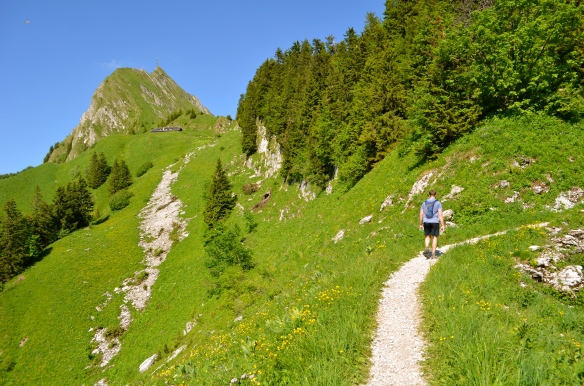 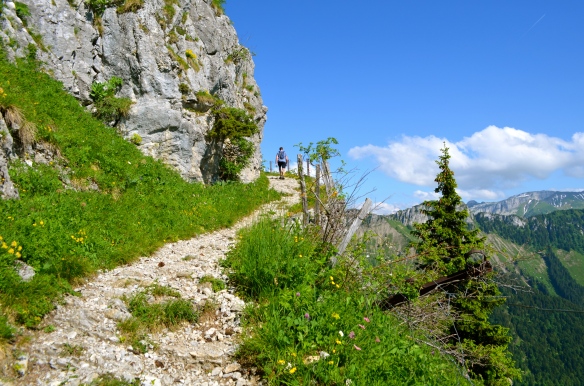 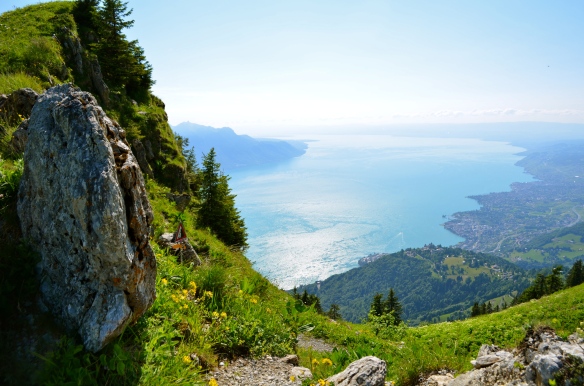 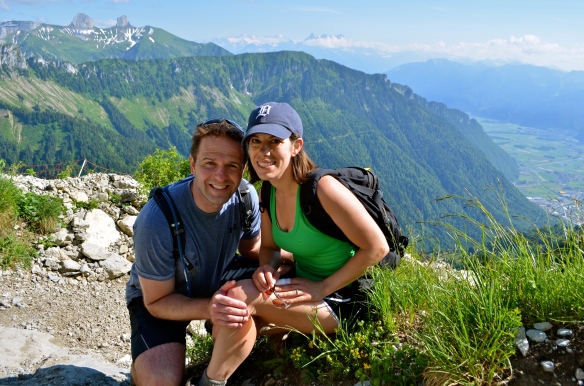 When we finally reached the top, we found snow!  I know, I know.  After several hours of hiking, the bandage on my paw looked about as dirty as the snow. 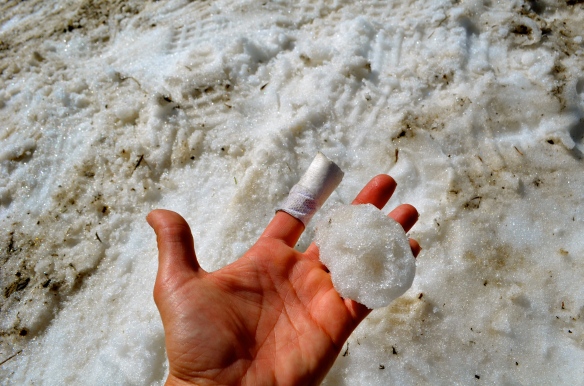 Yep.  The finger is still bandaged. 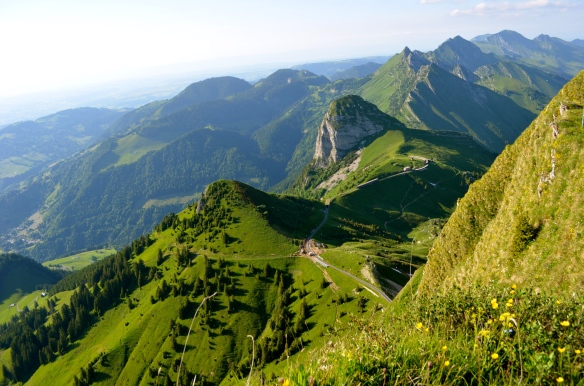 He was exhausted at the end of the day (and very, very hungry).  I thought it was worth it.  He joked that I tried to kill him.  I’m happy to report that he’s forgiven me.  Either that or he is lulling me into a false sense of security while he plans his revenge. 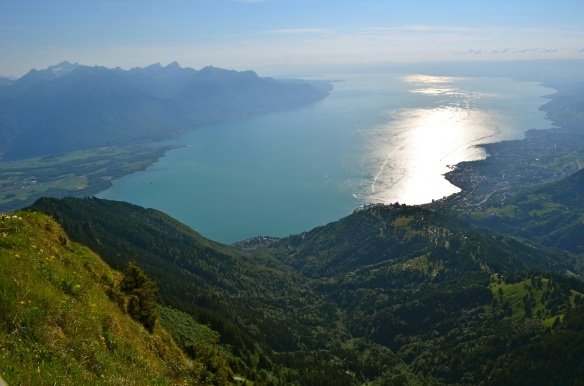 It was a long, sweaty (especially on his part), but enjoyable hike from Lake Geneva (Lac Leman) in Montreux to Rochers-de-Naye at 2041m (6,709 feet).   At the top, there was snow and unforgettable, jaw dropping views. 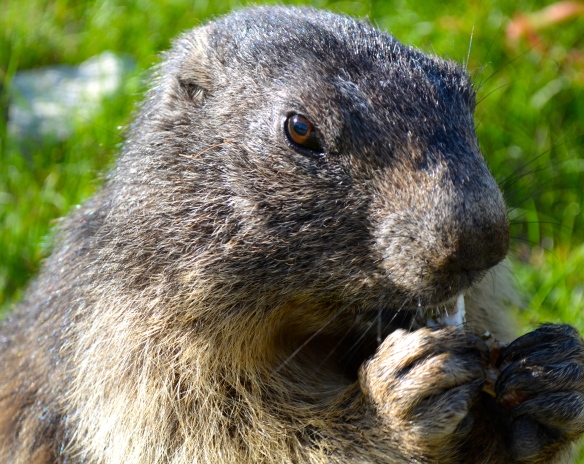 They also have Marmot Paradise.  Who doesn’t love these beaver-like animals?   I also enjoyed the Alpine garden with lots of special species of Swiss Alpine plants and flowers. I even saw Edelweiss! 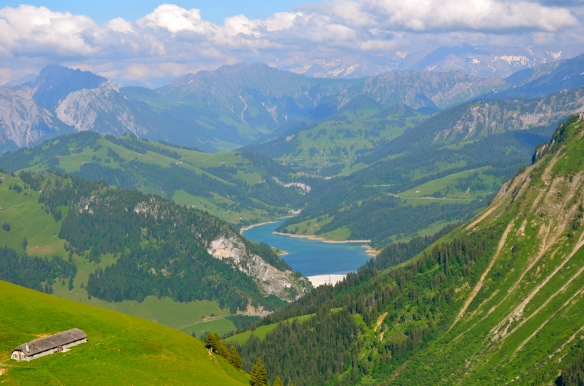 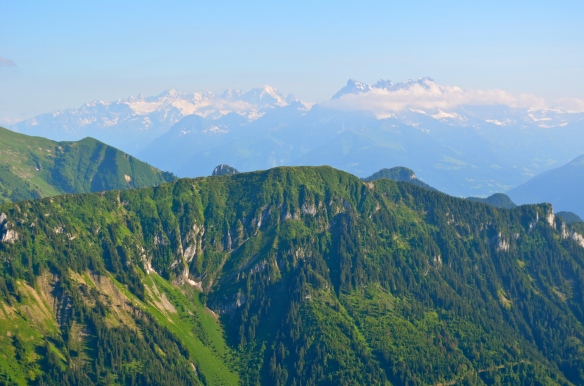 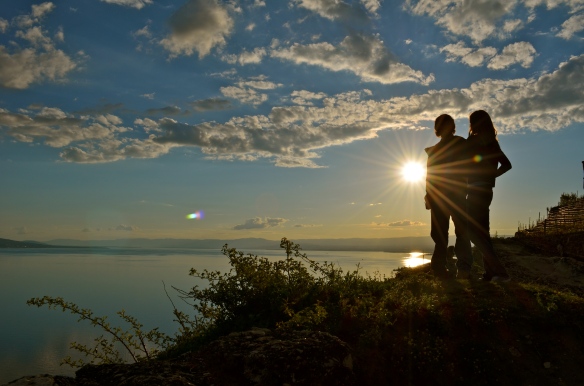 I like to stop along the way.  If I can get off a train and nose around a town for a couple of hours or pull off the highway to see something cool, I’ll do it in a heartbeat.  When we had Mr. Rome and Ms. Barcelona visiting, they hiked from Chateau de Chillion (near Montreaux) to Vinorama in Rivaz.  I picked them up there.  Although the lakeside is beautiful, I love the views from  Lavaux‘s terraced vineyards.  It was a gorgeous day and I couldn’t let them miss the view of Lac Leman (Lake Geneva) and the Alps. 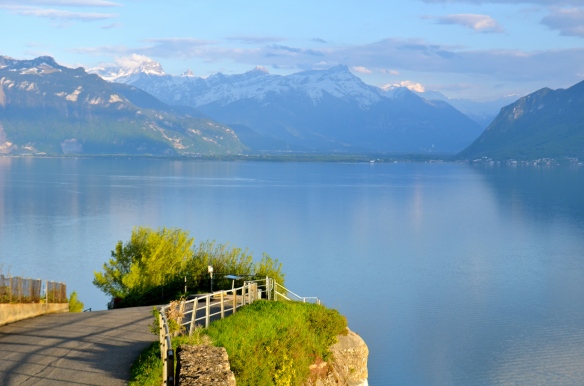 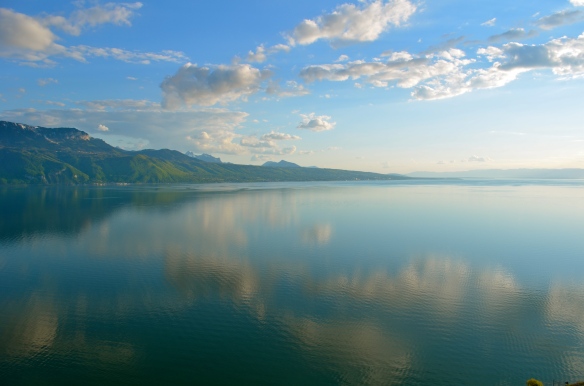 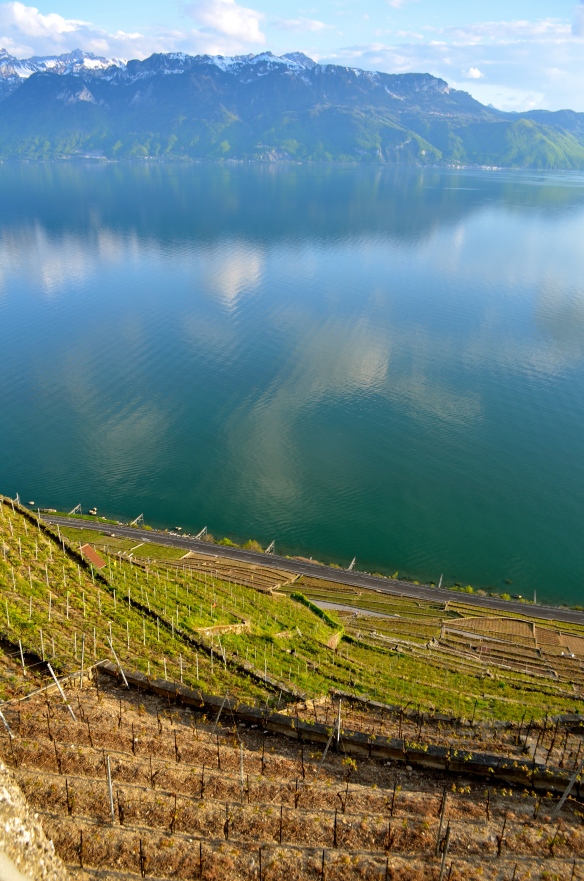 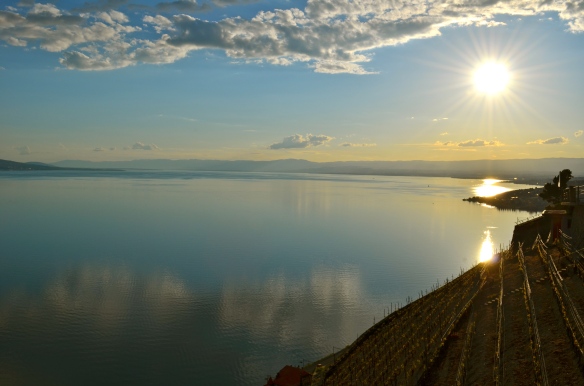 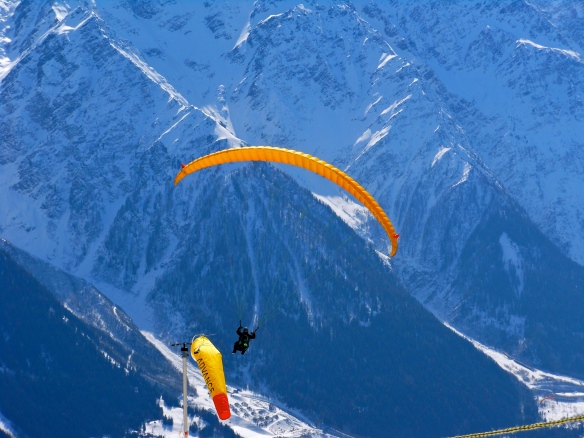 French, Germans and Swiss are paragliding enthusiasts.  In this adventure vacation paradise, paragliding is huge.  Many weekends (in summer and winter) we see paragliders soaring over valleys… from the (relative) safety of a mountain. 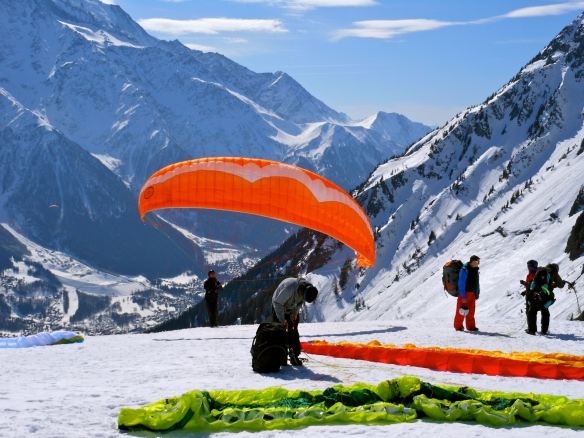 When we were skiing in Chamonix, we saw paragliders jump off the mountain!  They soared over the valley next to Mont Blanc.  We watched them from the cable car all the way down into town.  Someone even landed down there wearing skis!  It was impressive (sorry I couldn’t get a picture). 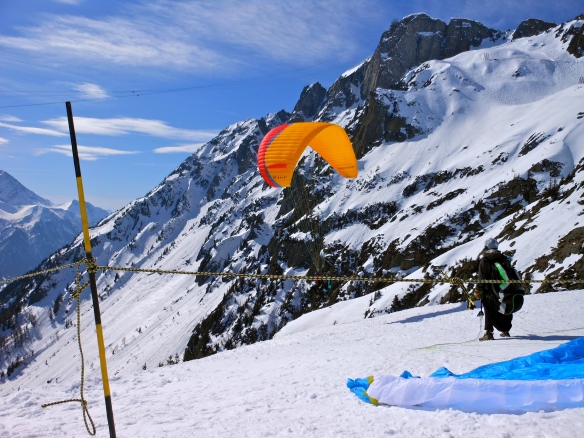 Paragliding involves a manual launch, in other words, you run off the mountain!  Paragliders have “flown” off almost all the US and Europe’s major peaks.  A couple of paragliders have even launched off Mt. Everest! 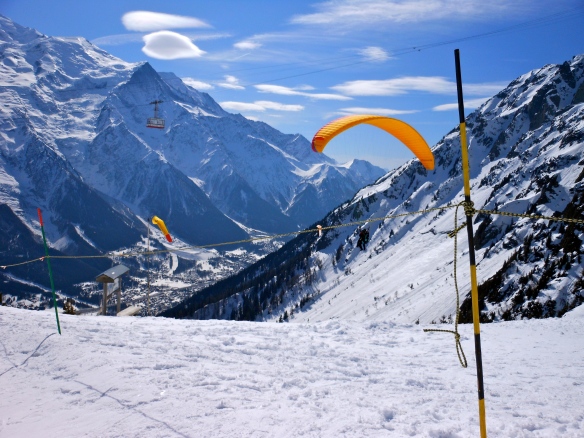 The paraglider, also known as the pilot, sits in a harness, manipulating the fabric wing made of rip-stop nylon to soar upwards on currents of air.  They maneuver Kevlar suspension lines and to control the pressure of the air entering the vents to catch air currents to gain height and change direction. They can stay aloft for hours (the record is 11) and travel long distances (the record is 186.4 miles/300 km). 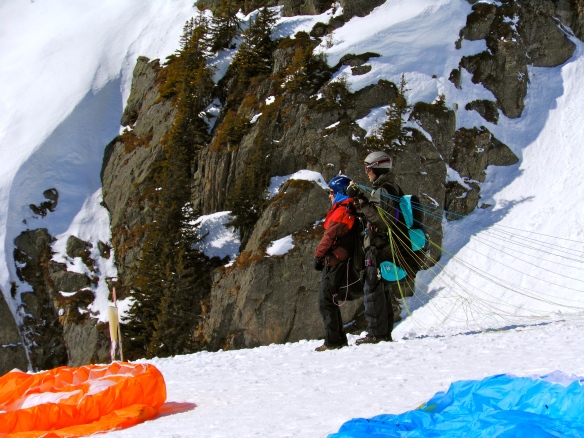 We saw an introductory, tandem launch.  Beginners must learn to launching, turning and landing to fly by themselves.  Paragliders risk their lives by running off a precipice.   As such, pre-flight is of paramount importance.  They research the site, the weather forecast, and carry out pre-flight checks to their gear is in perfect condition and ready to deploy.   The maxim “it is better to be on the ground, wishing you were in the air rather than in the air, wishing you were on the ground” reminds paragliders to abort takeoff if their flight is compromised. 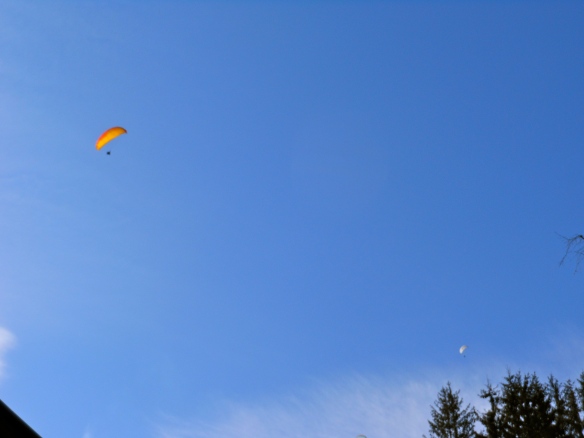 Other popular paragliding spots include: 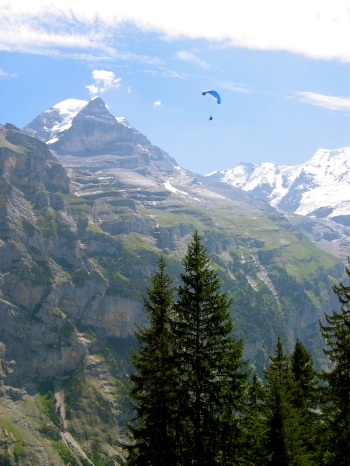 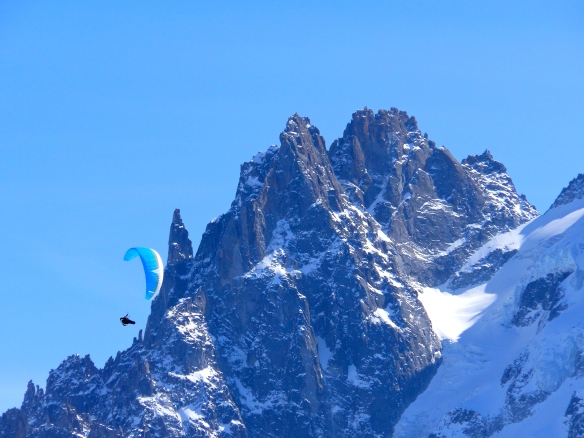