I visited Fribourg.  It is a charming, medieval town.  Wonderful old details have been preserved and in the historic quarters many new additions are consistent with the traditional surroundings.  Before streets were numbered, buildings and businesses were identified by symbols carved into the buildings or signs hanging from them.  Walking through the streets, I noticed many hanging wrought iron signs with icons over shops, cafes, hotels, restaurants and other businesses. 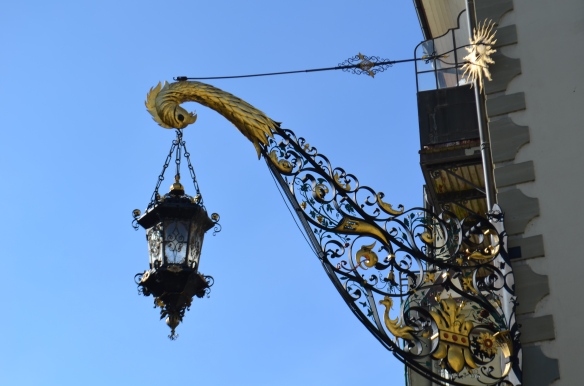 Such signs were hugely popular in the 16th and 17th centuries.  Their purpose was to attract the public; they were a sort of advertising.  As a result, they were often artistic and elaborate. Even the metal posts from which they hung were elaborately worked.  They functioned not only to identify the business and as advertisement, but also as landmarks for directional information before street names and building numbers. 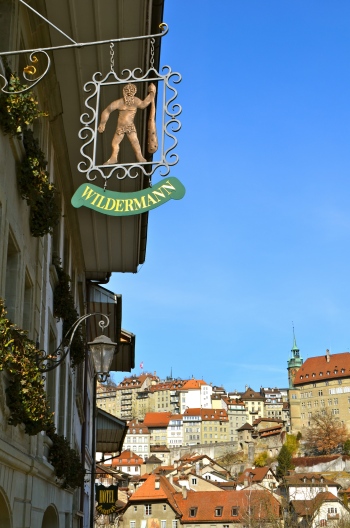 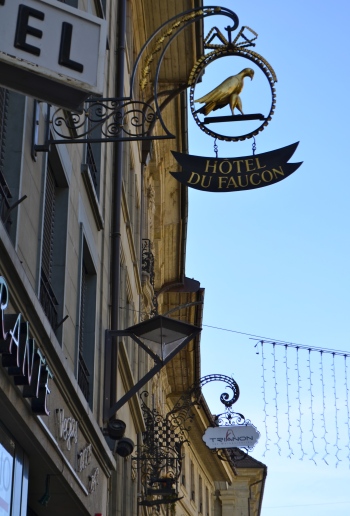 Over time, certain symbols became common on signs as a sort of code to help the illiterate public identify the nature of the business inside.  They include:

Eventually, increased travel led to competition.  To differentiate themselves from their competition, signs began bearing the name of the business and a representative symbol for illiterate customers.  Over time, the sizes and heights became more or less standardized to keep those on horseback from banging their noggin.  While these types of signs were common in Europe, different areas enacted different rules governing their size and height. 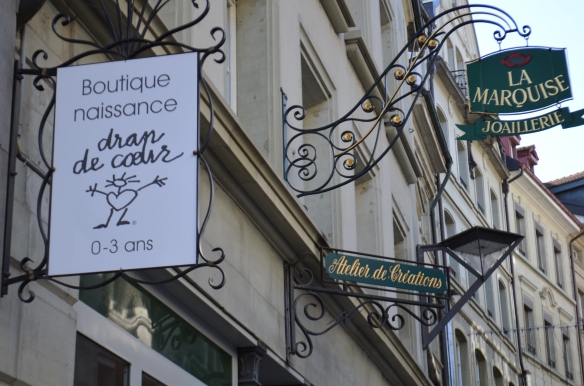 I chuckled at some of the more modern twists on the signs.  WC means water closet.  This sign marks the entrance to public toilets. 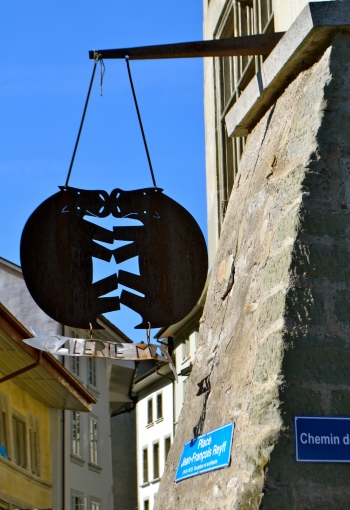 Even Starbucks got themselves one.

I have to admit, they are a bit more charming (if less hypnotizing) than the giant neon signs that are so prevalent in the US.  Looking for pictures of them made me a bit homesick, but not hungry.

From Getty Images via The Telegraph

Founded in 1157, Fribourg was a sovereign republic until it joined the Swiss Confederation in 1481. Fribourg sits in a valley between lakes and mountains with the Saane river (Sarine in French) flowing through it. It is a gorgeous setting, but this is Switzerland, where picturesque settings abound.  We’ve gotten accustomed to the incredible beauty and now almost expect it.  Fribourg did not disappoint. 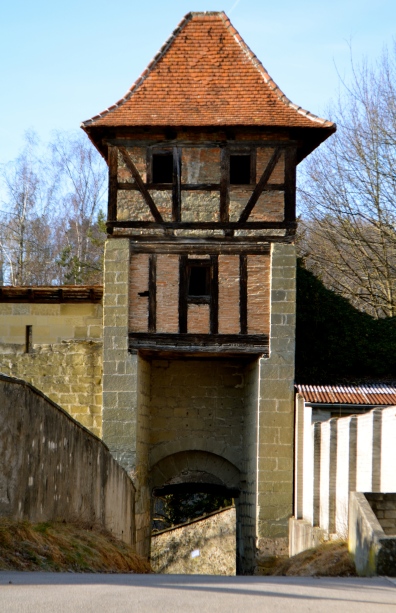 Fribourg isn’t large (population 40,000), but is charming.  It is home to the University of Fribourg.  This gives the city a slightly more cosmopolitan atmosphere and the vibrancy of a university town.   It’s medieval neighborhoods are well-preserved and charming.  The buildings show a blend of French and German Swiss culture.

Fribourg is known for its beautiful Gothic buildings.  Its old patrician townhouses combine German baroque and French classicism.  They have tons of detail, from stone carvings to ornate doors, to places to scrape your shoes.  Architectural buffs and home decor enthusiasts will love them.

Wander the small, steep streets and medieval staircases.  If you get tired, you can easily stop at a cafe in one of its many cobblestoned squares adorned with fountains.  Fribourg also has a funicular for those less enthusiastic about urban hiking.

Walk across Fribourg’s beautiful bridges.  The Pont de Berne, is a well-preserved covered wooden bridge dating from 1580.  The solid, yet elegant, Central Bridge links the old town with opposing cliffs. 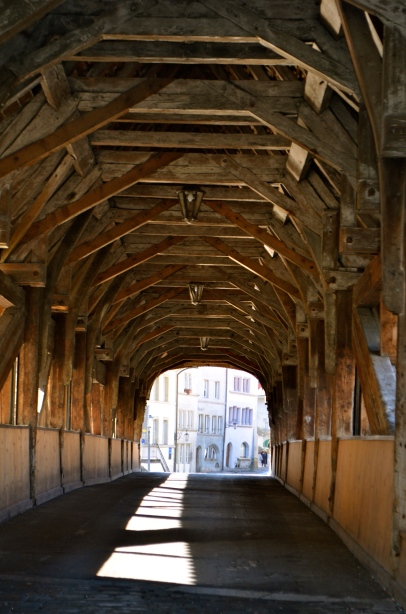 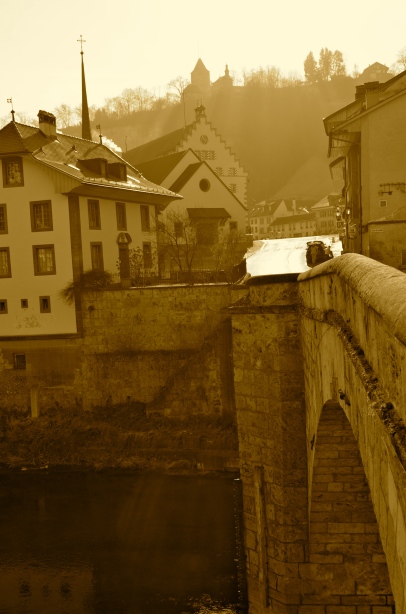 Crossing the river and climbing the hill on the opposite side yields stunning views of Fribourg’s Old Town.  The St. Nicholas‘s Cathedral  lofty 15th-century Gothic bell tower is also easily visible on the skyline.

The city hall’s (Hôtel de Ville) gothic clock tower dates from 1546 (the blue pointy thing).  On Wednesdays, the square in front of city hall houses a market.  The nearby Rue de Lausanne is a car-free pedestrian zone.

Fribourg is not just the name of the city.  It is also the name of the canton (like the state).  The canton of Fribourg is bilingual with the Saane river (Sarine in French) forming the language boundary. On one side, they speak French, on the other, Swiss  German. All road signs in the Canton are bilingual!

Fribourg is the French speaking of the city.  Freiburg is the German spelling, but is not commonly used to avoid confusion with the German town of Freiburg.

It is worth taking at least an afternoon to wander Fribourg’s streets.  We plan on returning to spend an evening there.