Many “old towns” are (almost completely) car free.  Many towns, use a system of passes and barriers to ensure that the streets remain traffic free while allowing residents parking, taxis access and permitting deliveries.

Many streets in city centers are reserved for local business people, residents, city buses, or pedestrians. To enforce this the entry to the street is always marked as such, in the local language and with standard signs, and is often blocked by a couple of 8″ diameter steel posts rising up from the road. Those with permits have a swipe card which lowers the posts momentarily so they can drive through. If you try to sneak through right after someone goes in you might hear a sort of crunching sound as the posts come up under your car. This will be embarrassing and expensive.

Some of the car-free towns we have visited include:

To encourage walking, biking and the use of public transport, many European cities make it hard (and/or costly) to park. 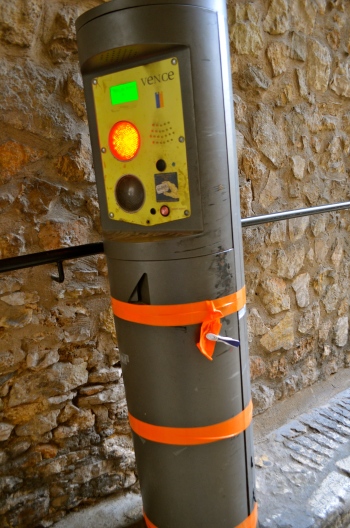 Eliminating parking spaces in Copenhagen has made room for high-quality pedestrian districts and bike paths, while street space once used by cars has likewise been repurposed in Paris for bike sharing and tramways. 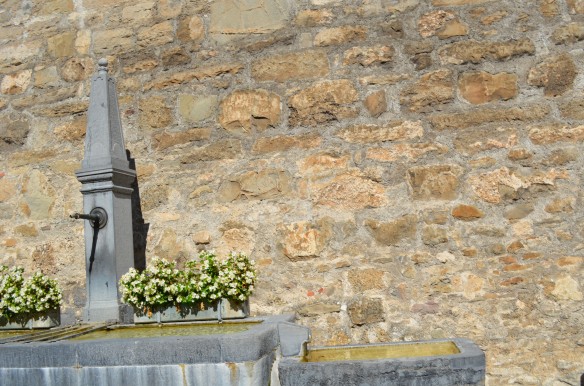 The Ides of March, (no, not the film) the fifteenth of March, is today.  It is the day on which, in 44 B.C., a group of conspirators led by Brutus (et tu Brutue?) and Cassius stabbed Julius Caesar to death in the Roman Senate.  It got me thinking about Rome’s legacy here in Switzerland.  While evidence of Switzerland’s time under Roman rule is everywhere,  I have a favorite part of their legacy, fountains.

Rome came.  Rome built fountains.  Rome fell.  The fountains remained.  Who doesn’t like a fountain?  When people could figure out how to do it again, they tried making fountains like those cool old Roman ones.  They did it in Switzerland, but all over Europe.  Right on. 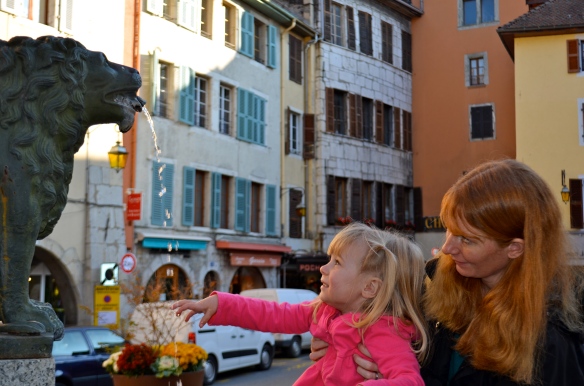 When we hike in the summer, we can pretty much be sure that we will be able to get water from a fountain.  The cows have to drink way up there, so you know they are going to have water.  The caveat to this, and don’t mess this up or you will end up like us paying $12 a bottle, is that there are no fountains when you are up high enough.  If cows can’t graze up there, they are going to build it.  Period. 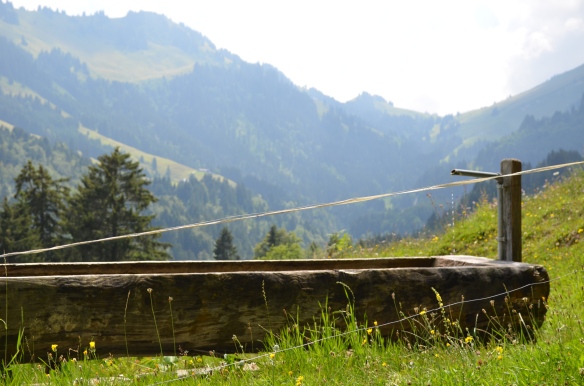 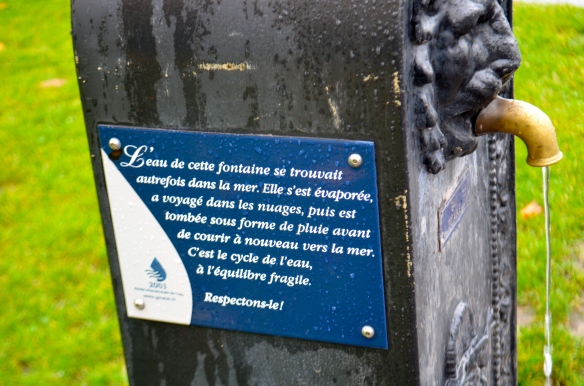 The water of this fountain once stood in the sea before it evaporated. It traveled in the clouds, and fell as rain before running again towards the sea. This is the water cycle has fragile balance. Respect it.

At almost every fountain, the water  is drinkable.  In Switzerland, if the water isn’t safe to drink, it will be marked with a sign that reads “Eau Non-Potable” or and “X” over a cup.

You can stick your head under the fountain, like you would at a water fountain, or collect it in a bottle.  I love not having to plan my water stops or carry water with me on long runs; the fountains are everywhere. 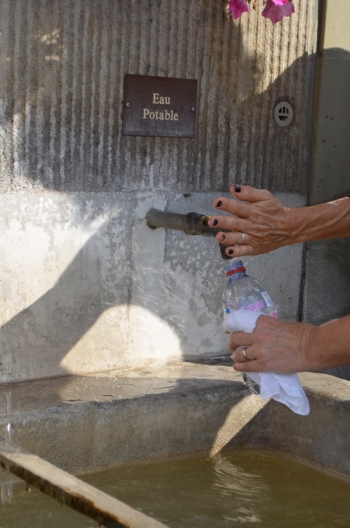 Eau Potable means the water is safe to drink 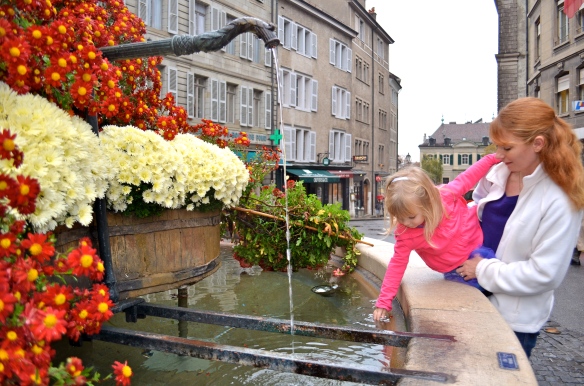 Other times, the fountains themselves are decorative and/or commerative.

A fountain in memory of alpine guide Ulrich Inderbinen who summited the Matterhorn over 370 times, with his last ascent at the age of 90!

When we were in the Bernese Oberland, we stayed in a night in Grindelwald (one option if you do Kleine Scheidegg or Jungfraujoch).  We suspected that it might be a bit big and a bit touristy for our tastes.  When you have views like these of the Eiger, who cares?

In the late 18th century, foreigners discovered the scenic town.  The scenery is so photogenic that pictures of the vistas were widely reprinted.  This made the village internationally famous (the Eiger is Switzerland’s second most famous mountain after the Matterhorn), which, in turn, brought more visitors.

In the 19th century, Englishmen came to the village to climb the alpine peaks around the valley, including:

It’s in the heart of the Jungfrau region of the Bernese Oberland (the Bernese Alps).  In the summer, it is a popular base for hikers and a ski town in the winter.

I think this is technically Wetterhorn. Until the Eiger became more famous, it was Grindelwald’s iconic symbol. 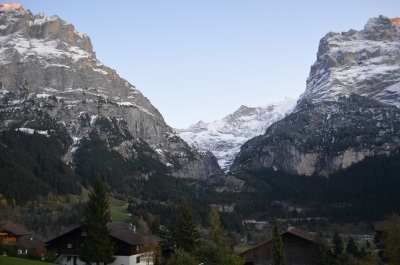 Improvements in transportation infrastructure, the Grindelwald road (built in 1860-72) and the Bernese Oberland railway (connected to the village in 1890), transformed the difficult trip into a simple one. As a result, tourists to flooded into the village and many hotels/resorts were built.

A rack railway was built to Kleine Scheidegg in 1893; it was expanded to the Jungfraujoch in 1912. It is still in use.  We watched it wind up the mountain from the balcony of our hotel room.  One of the great things about Switzerland is that the mountains are so accessible.  In the late, 19th and early 20th centuries, numerous ski lifts, cable cars, hiking trails and alpine huts were built.  Today, Grindelwald’s economy of is virtually entirely based on tourism.  Like I said, it’s a bit touristy, but with beauty like this, who cares? 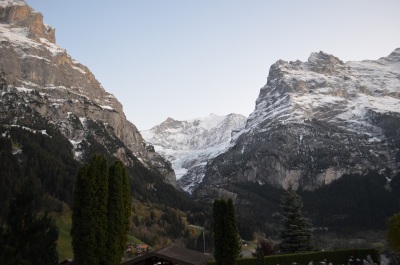 One of our favorite parts of Switzerland is the outdoors and the superb hiking.  When we hiked at the Matterhorn, I was stunned by its beauty.  In the Bernese Alps it was déjà vu all over again with sunny skies and gorgeous mountain views.

In warmer months, we fill our water bottles using these log fountains. 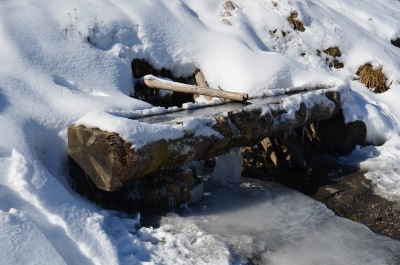 There were a couple of places where the trail was a bit slick (which is understandable when you see the above photo).  I only fell once.  Luckily, I have a bit of padding back there.  It softened the blow when I went crashing down.  I was a bit worried about falling and tumbling down the side of a mountain.  The Swiss like to use those hiking poles when they hike (or even walk on a flat trail by the lake in Geneva).  I might have to get a pair.    I don’t think they’d protect me from the falling rocks though. 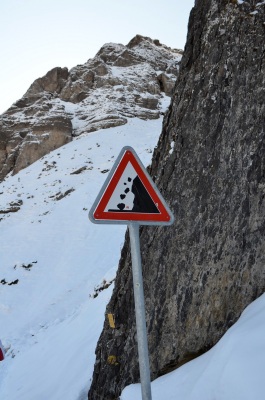 I’ve loved cairns ever since we saw tons of them hiking Ben Nevis, but hadn’t seen such a pretty art installation.  Right on. 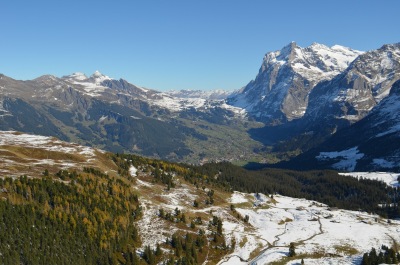 This is the iconic North Face of the Eiger with the town of Grindelwald below.  For a cool YouTube Movie of someone (not that guy below) climbing its North Face in record time, click here.  It’s Ueli Steck‘s Triple Speed Climbing Record.  He bested his own speed record for scaling the Eiger’s north face via the classic Heckmair Route.  This improvement is likely because he did not belay, instead he relied on a loop of rope that allowed him “to hook on occasionally,” and reduced the weight of his gear.   This isn’t his only big climb or big mountain; he’s kind of a maestro.   He also did speed ascents of the two other great north faces in the Alps, the Grandes Jorasses and the Matterhorn (completing the Grand Jorasses in 2 hours 21 minutes, and the Matterhorn in 1 hour 56) in record time.

He’s got a cold.  We’re in Switzerland.  This is a no-brainer. Riccollaaaaaa!    We never bought them in the US, so I can’t tell you if they taste the same.  Regardless, they are surprisingly good.

Here’s some fun Ricola info for you.  The mountains on the label are the Eiger (the ogre) on the left, the Jungfrau (virgin) on the right and the Monch (the monk) between them.  Obviously.


Ironically, the Ricola gardens are outside Zermatt home of the Matterhorn (another famous mountain, but not on the label).* 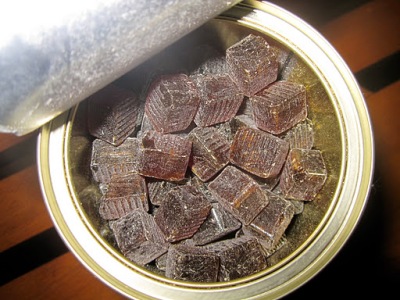 One more interesting Ricola tidbit, Michael Jackson included them in his pre-concert ritual! 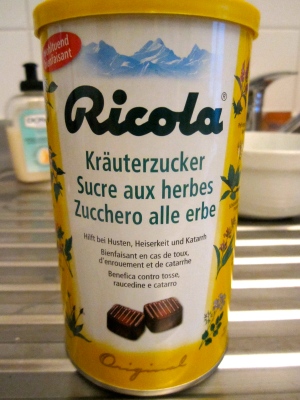 Here’s the link to the commercial, Halloween Ricola commercials, a politician whose aide is coughing, a slightly off color European commercial, some funny ones in German featuring typically Swiss things like Heidi, hunting, mountain climbing and a goat.  WARNING: If you watch it, you will be bellowing “Riccollaaaa” all day long.

* There are actually five Ricola gardens in Switzerland.

I try to read the paper every day to practice my French.  Almost every week, there is an article about some sort of mountaineering or hiking accident (usually resulting in death). Sometimes, the paper will note the discovery of a body from an accident decades ago. 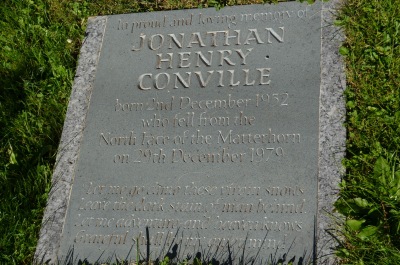 When we were in Zermatt, we happened upon the town’s cemetary.  Four of the first seven people to successfully summit the Matterhorn died on the descent when a rope snapped.  Since then, over 500 people have died attempting to climb the Matterhorn.  Currently, about 12 people a year die at the Matterhorn.  These deaths are usually due to falling rocks, falls, bad weather, inexperience and the mountain’s difficulty. 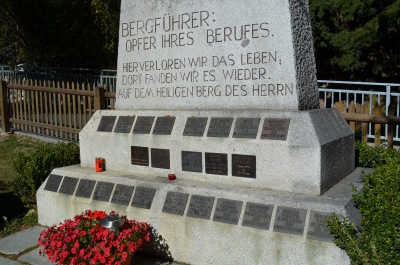 Last weekend, we went to Zermatt and saw the Matterhorn!  It was insanely beautiful, even mesmerizing.  I am a child of the eighties and so I use the word “awesome”.  More accurately, I misuse it.  When you see something as awe-inspiring as the Matterhorn, you vow to use the word properly in the future so that words to describe such beautiful, moving things will have power and meaning.

We took the train up to Gornergrat (elevation 3130 meters/10,269 feet).  It has a nice view of the Matterhorn and of the glacier. 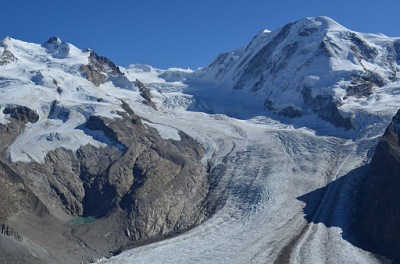 From Gornergrat, we hiked down to Zermat (elevation 1620 meters/5,250 feet).*  It was wonderful to see the Matterhorn over time and from so many different angles.  We also liked seeing the change in vegetation on the way down.  The weather cooperated.  I don’t think there was a cloud in the sky.  This late in the season meant that any snow that was going to melt had already melted.  As a result, we could really see the geology of Switzerland’s mountains. 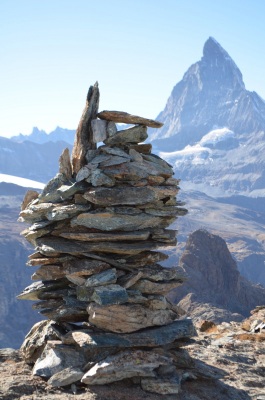 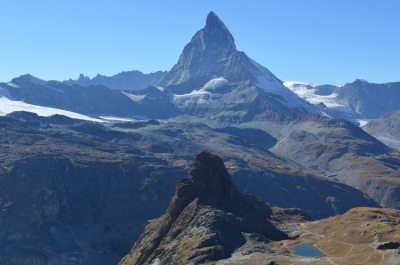 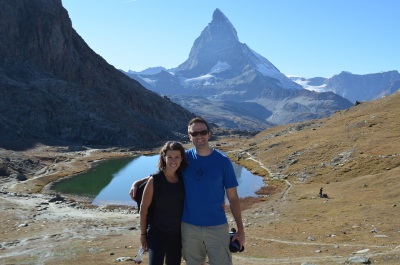 When I say I was mesmerized by it, I mean it.  I took at least 300 photos of it.  He made fun of me (deservedly so), but I couldn’t help myself. 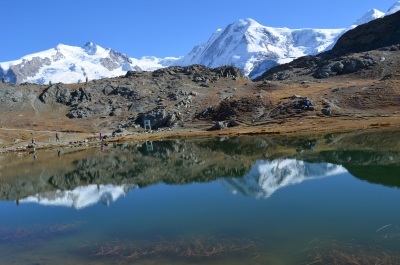 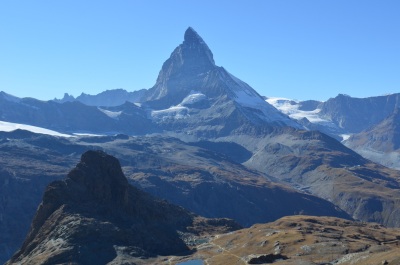 Zermatt is in the valley below.  I swear it looks closer than it felt going down.  You can see the change in vegetation as we descended.  The tree line slowed down my rabid picture taking. 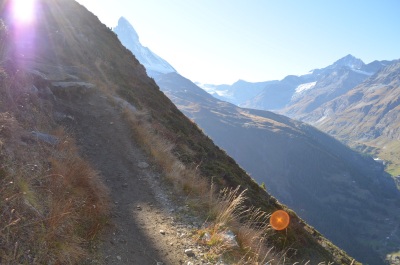 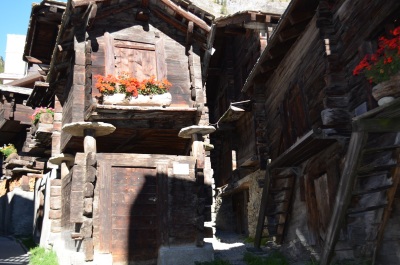 When we went to Zermatt, he fell in love with the town.  It is touristy, expensive and everything revolves around a single mountain (the Matterhorn).  Nevertheless, it is very pleasant and still has loads of charm.   They have kept some of the original buildings, which are very distinctive because they have giant stone discs in the pillars.  Their function was to keep the mice out!

Although there are lots of hotels and some larger ones, they are definitely cuter than hotels on the Vegas strip.  The Swiss use tons of wood in building and as accents, Zermatt is no exception.  There are also tons of flower boxes and small plantings. 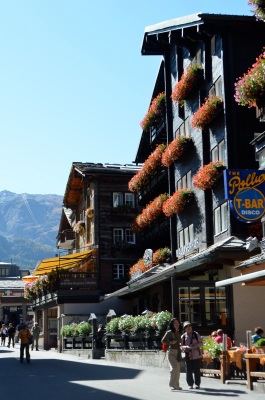 Zermatt seems to welcome everyone from the ultra rich, to backpackers and outdoor enthusiasts.  For the number of people who visit, Zermatt is surprisingly calm and peaceful.  There are no cars. Vehicles are small electric vehicles.  We left our car in the valley and took the train to get there.  It felt as though you were, literally, leaving it all behind. 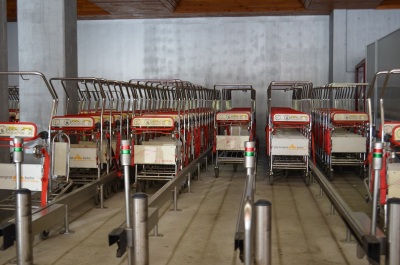 People use these baggage trolleys to walk their luggage from the train station to the hotel (some hotels will send one of the little electric trolleys shown above).

I love public art.  He probably wouldn’t say that, but I do think it adds to the general beauty and pleasantness that he picks up on.  Finally, there is this.  Need I say more? 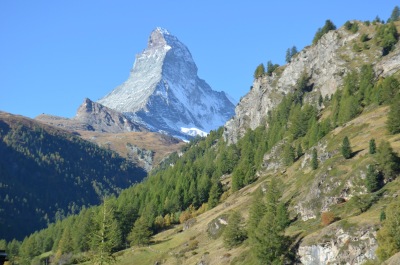