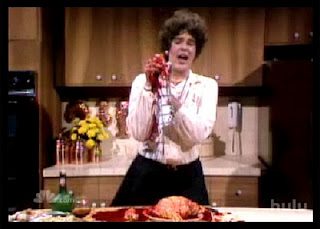 From Doe Cooks Stag, who undoubtedly got it from Saturday Night Live and NBC

This morning, I cut the dickens out of my finger while making breakfast.  After applying pressure I lifted the towel to see how bad it looked, blood started gushing out.   I went into the bedroom where he was still sleeping and said “you need to get up because I think I need to go get stitches.”  He jumped out of bed with a look of extreme panic and fear.  Poor guy.  If I ever doubt how much he cares for me or my importance to him, remind me of that look.

Remember the old Saturday Night Live sketch where Dan Aykroyd parodies Julia Child continuing to cook while bleeding profusely from a cut on his hand.  Picture that instead off me posting disgusting pictures of my mangled paw.  To watch the hilarious clip, click here.

I had him take a look at my finger to see if I needed to go to the hospital.  He took one look and said yes.   I snuck a quick glance and almost fainted, literally.  I don’t like blood and I immediately sat down to avoid hitting it when I passed out.

After lying down on the floor for a bit, we walked to the tram with a towel tourniquet and my hand over my head.  We went to a nearby hospital.  They were great and couldn’t have been nicer.  They had me in and out (and in possession of all 10 digits) quickly.  The Swiss healthcare system is fantastic (our friend wrote about having surgery here if you’re curious).

Just like George Costanza in Seinfeld, my career as a hand model is over (check out a clip here).   I should walk around with oven mitts. 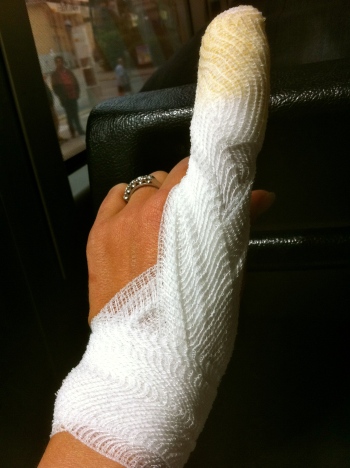 Jokes so far include:

Sad, I know, but I took a painkiller so I’m giggling.