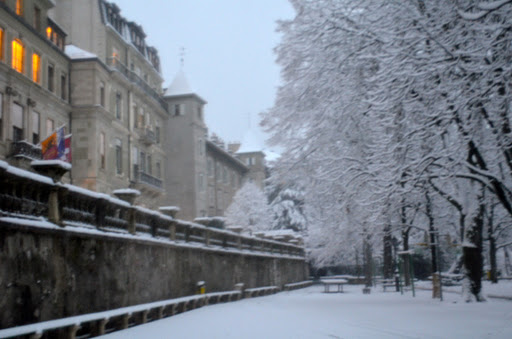 No, I’m not talking about a giant SUV.  I’m talking about a pretty cool party. Geneva’s Escalade commemorates the Protestant city of Geneva‘s defeat of the Duke of Savoy‘s Catholic troops in 1602.

I’m not really sure, but these might be Geneva’s version of Paul Revere?  If you’re going to visit Geneva, this might be the best time to do it.  It’s a really cool festival that’s part spectacle, part party and very accessible.  You’re in the middle of it so you’ll experience it with all of your senses.  The sounds of drums and fifes echoed through the city walls, while the smell of mulled wine (vin chaud) wafted through the air. 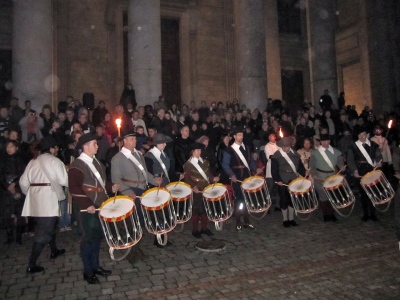 Here’s the deal. Charles Emmanuel I the Duke of Savoy wanted Geneva’s wealth. Genevans wanted their independence.  Many of them were religious refugees and would have had no where safe to go if Geneva had fallen to Catholic France. They also wanted to keep their money instead of giving it to the Duke. 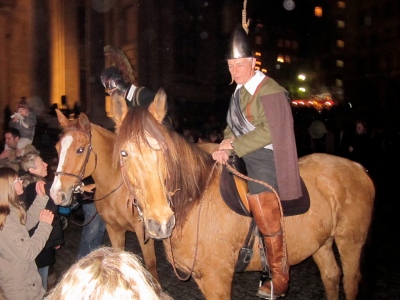 When the Duke’s troops attacked, grandma threw a pot of boiling soup over the city walls as they attempted to climb them.  She then woke up the city so that it could defend itself.  Pretty much, they celebrate not their city not being overtaken by the Savoy and not becoming part of France. 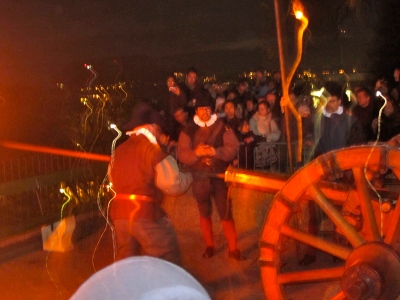 It’s historic in the best possible way.  They have parades.  The old town is lit up by people carrying torches.  They really did fire the muskets!  They were so loud.  It scared the heck out of me… and the kid next to me.  They fire cannons too.  People dress up in period costumes.  Some are even on horseback.  The Passage de Monetier, a secret passage in Geneva’s old town is open for only this one night. 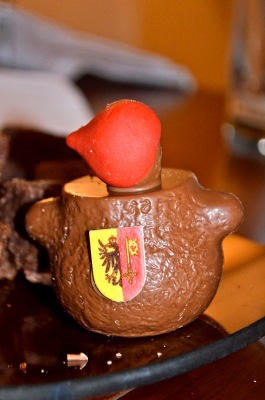 How do you celebrate grandma’s victory?  In the most quintessentially Swiss way. Chocolate!  They make giant tureens (cauldrons) of chocolate with marzipan vegetables (to be like granny’s tureen of soup).  Stores like Migros and Co-op sell the “vegetables.”  I bet it’s really easy to get kids to eat these vegetables.  They also have tasty street food and (of course) mulled wine.

Children dress up in costumes, kind of like they would in the US on Halloween.  We didn’t see any risqué costumes like you do there. 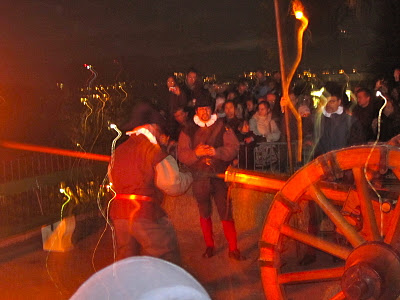 The cannon was louder than the muskets.  Unfortunately, there are not enough occasions where shooting off a cannon is permitted.  If you can get away with it, it definitely says celebration (or attack). 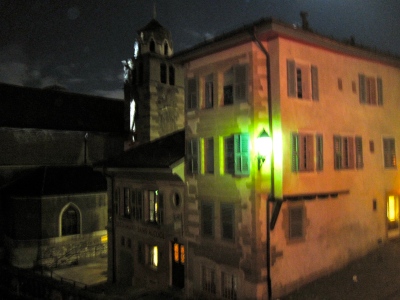 There’s also a race/run that takes place weekend of or preceding the night of the 11th It usually starts in the  Parc des Bastions, where the Savoy troops congregated before attacking the walled city, and goes through Geneva’s old town, before finishing near the start. It’s a big deal here and everyone gets involved; you’ll even see families and running together.   There’s even a youth race and a costume run.

*Escalade translates from French into English as climbing.