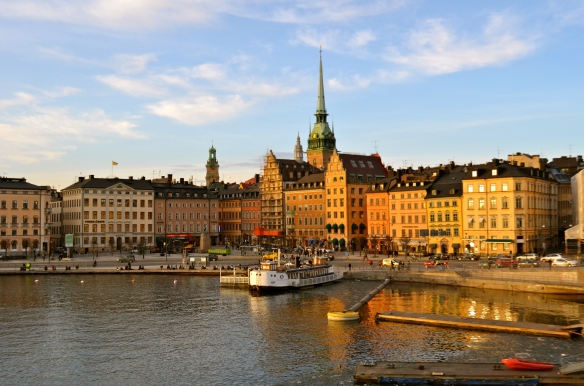 Stockholm is one of the prettiest cities we have ever seen.  Lots of European cities have old towns (Fribourg, Malmö, Geneva, Prague, Annecy).  Gamla Stan, Stockholm’s old town, charming.  It is an island connected to the rest of the city by bridges.  The buildings date from the 13th century.  We loved strolling Västerlånggatan in Gamla Stan.  There are lots of boutiques, cafés and restaurants.

It is enchanting with cobblestone streets, narrow alleys, old architecture, lanterns, boutiques, antique shops and cafés.   Parts of it are filled  with souvenir shops and restaurants, and the like.  Yeah, they are a bit of a tourist trap (especially Västerlånggatan), but they don’t make the old town worth writing off. 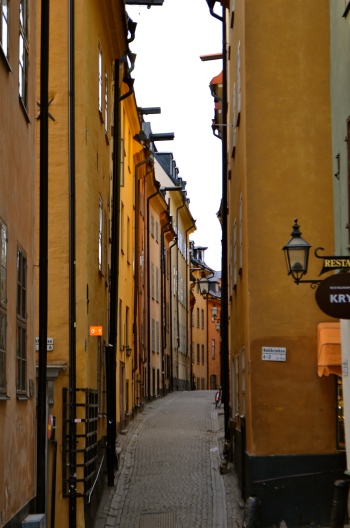 Wander the side narrow streets.  Look for the signs above doors that indicate the building has paid its fire insurance (thanks Rick Steves).  Notice tons of other period details.  Find places with some Swedes.  Trust me when I tell you, it’s great fun.

For those who get bored after their 20th (or 2nd) palace, Stockholm has some swingin’ history.  Loads of writers and artists pickled themselves here.  It also has some gory history.  In 1520, the bloodbath of Stockholm took place here.  80-90 people were executed in this square (near the Nobel Museum).

Plus, you never know who you might run into at the palace…