Locals have complained about the deteriorating security situation ever since the Schengen Agreement opened Switzerland’s borders to much of Europe.

In December 2008, Switzerland (even though it is not part of the European Union) became part of Schengen, a zone offering unrestricted travel to Europe.  In Schengen areas, borders are open.  There are no more passport checks entering countries or at borders (even though there are police checks at borders or checks for trafficked goods). On a side note, don’t get caught bringing a bunch bargain French meat into Switzerland.  The Swiss, who love a fine, will make you pay.

Before our move, people warned us of the problems with break-ins.  We forked over a ton of CHF‘s to get this.  It bolts the door into the door frame.  We also got an additional top lock.  To get into our apartment in Geneva, you pretty much need to do this. 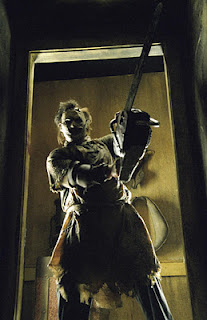 All of the buildings here have these too.  Our code changed once already because of an attempted break-in.  Our neighbor’s bar stopped the thieves, but it was so badly damaged that they had to call a locksmith to let them in.

After having lived in Detroit, I keep track of my stuff, don’t leave anything out, lock all of my many locks and don’t worry.  Mom and Dad, you don’t need to worry about either.  Despite the rise in reported crime, Geneva is still the sixth safest city in the world.

While we were in Prague, we visited the Communist Museum. Czechs seem to have put their post-communist energy into looking (and moving) forward and not looking back at communism. Even so, signs of their time under communist rule are unescapable. 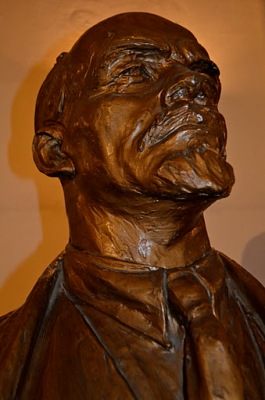 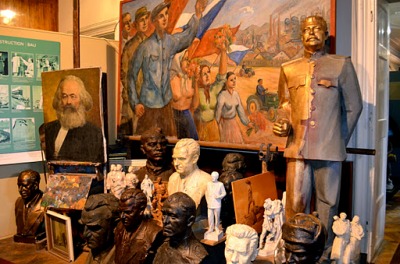 In the 1946 elections, communists got more votes than any other party and their chairman, Klement Gottwald, became Prime Minister. He was an alcoholic, syphilitic, anti-democratic and more than happy to take orders from Stalin. 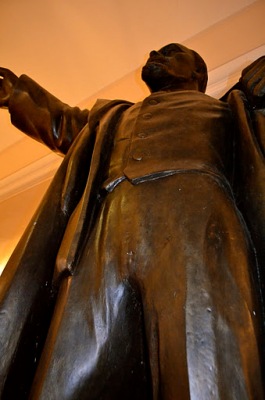 In 1948, 12 non-communist government leaders resigned as a protest, believing their resignations would not be accepted. They were.  Communists took complete control of the government and Czechoslovakia fell under the strong influence of Moscow.

There was forced collectivisation of industries and the government carried out a currency reform that rendered savings worthless.  The Czechoslovakian secret police’s repression was powerful.  People fled the country, were imprisoned and/or executed. 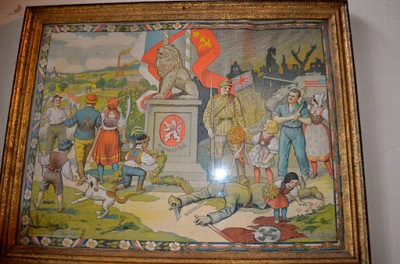 As you can see from the poster, Czechoslovakia supported North Korea. 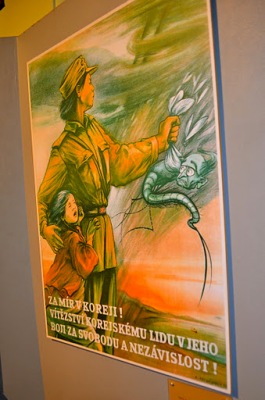 This translates to “Watch Border Zone Entry Only Allowed”.

In 1968, there was a battle between hard-line communists as a group wanted liberalization to a less strict version of communism. Reforms for the end of citizen’s surveillance by the secret police, the end of censorship freedom of assembly and expression ensued.  It is known as the Prague Spring.  The Soviet Union feared the Czech Republic would leave the Communist Bloc, the spreading of liberal communism and unrest, the loss of control and an opening of borders with the West.

In 1968, the Soviet’s and other Warsaw Pact countries invaded in a large, well-executed and well-planned operation. The plastered over bullet holes are still visible on the facade of the Czech National Museum because the builders used a lighter color of plaster in their repairs. 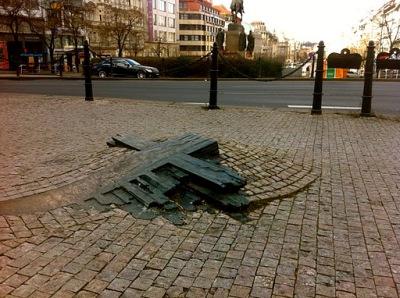 In January 1969, student Jan Palach, set himself on fire in Wenceslas Square to protest the invasion.  His funeral turned into a major protest against the occupation.  Protests were unsuccessful and a clampdown followed.  The Communist Party was thoroughly cleansed of any liberalizing members after the Prague Spring, kicked half a million members out of the part and dissolved all organizations that had supported reform.  Censorship was strict and Czechoslovakia’s sovereignty was limited by the Soviet Union.  The cross in the pavement marks the spot where Jan Palach and others died.
Wenceslas Square filled with protesters, again for protests marking the 20th anniversary of Palach’s death criticism of the regime escalated.  This time, the Soviet Union under Gorbachev didn’t react violently.   The ensuing confrontations with police were one of the catalysts for the demonstrations that preceded the fall of the communism with the Velvet Revolution 11 months later.

The museum contained a segment of the Berlin Wall which fell not long after.

When we were there Wenceslas Square still contained piles of memorials to its first post-communist leader Vaclev Havel who died in December 2011. 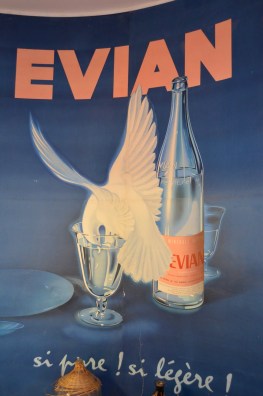 We live on a lake, surrounded by France.  There is a dividing line down the center of the lake separating the French and Swiss parts.* One of the French towns on the lake is Evian. Yep,that’s right, like the water. I went there with Hokie (and some other fine folks who haven’t yet declared their names for this blog).

Evian is small, cute, but small.  People had told us that there wasn’t much there, but we wanted to try to go to France by boat and thought what the heck. It has a small shopping district where souvenirs are cheaper than in Switzerland. The Evian “experience”** is located there. It was a bit “bare bones” and could use some marketing help with the exhibits. I suggest an Evian fountain. If you are there, stop in anyway. It’s free.

We walked along the street, stopped for crêpes and checked our watches. The next boat didn’t leave for over another hour. What to do? I had 5 Euros on me, so we went to the Casino.

When you play penny slots, it is amazing how long 5 Euro can last. We took turns picking machines and enjoyed ourselves. It was entertaining to see the smokers confined in little plexiglass cages to do their smoking. Sorry, I couldn’t take any pictures inside.
I had a bottle of wine in my purse (don’t judge) because people picnicked on the boat ride over. You can see it below. Unfortunately, I was also carrying a bottle of Evian, in Evian. This was a big no-no. I couldn’t enter the casino with my bottle of Evian and had to check it!

The funniest part is that they serve free Evian everywhere in the casino!

*This line in the lake between France and Switzerland is figural not literal. Please do not go looking to take a picture of it.  You will look like an idiot. 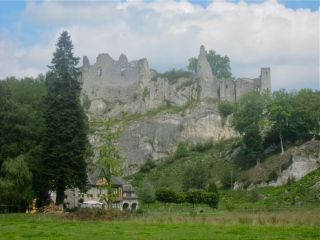 It is sometimes difficult to explain the relationship between the Flemish speaking and the French speaking parts of Belgium to other Americans. Heck, I’m not sure I understand it and I have been trying to for decades now. 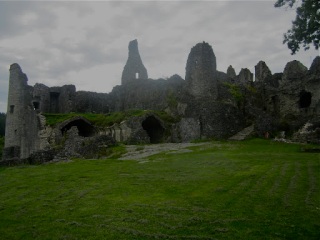 While I was in Belgium, we went to see the ruins of an amazing castle. It was both interesting and beautiful. If you want to read more about it, here is the link: http://www.montaigle.be/  Since it is in French, here is another link to see information about the ruins (this time in English) medieval-castle-ruins-of-montaigle. 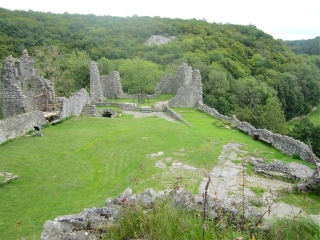 I wanted a picture of all of us with the castle behind us and asked a passer-by exiting the castle if they could please take our picture (in French). They did so and I thanked them. When they found out I spoke English they switched to it immediately and so did I.  This is because they were from the north of Belgium and Flemish is their mother tongue.* They made it clear that they preferred English to French.

When they left, I reflexively said “merci beaucoup” without thinking and then, immediately apologized for having spoken in French. To make reparations, I attempted a “dank u”.

*I have always been advised when meeting Belgians who speak Flemish to speak English not French (one of their country’s languages and mandatory in school from an early age). I was told that they could feel slighted that I had chosen to learn one of their countries other languages before Flemish. I have always done so and found their English to be excellent.