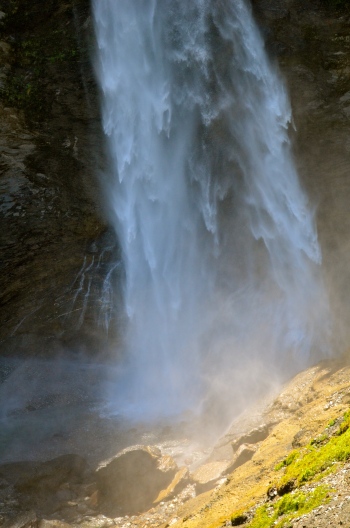 The Evil Genius and I went to Switzerland’s Bernese Oberland to see Reichenbach Falls in Meiringen (Switzerland).  We’d planned to go before the unfortunate finger incident with the immersion blender and decided to go anyway.  We lucked out with great weather. 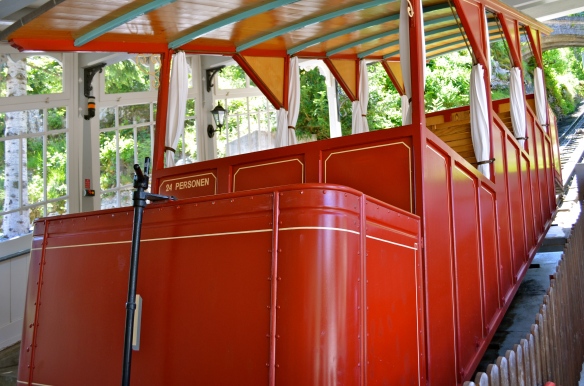 Although you can hike up to the falls (and beyond) we took the nostalgic Reichenbach funicular (a historic cable railway) which climbs through the deep gorge to the thundering falls.  At the top, there is an amazing view of rugged peaks and the surrounding countryside.  If you go, check this view out first because the rest is even more impressive. 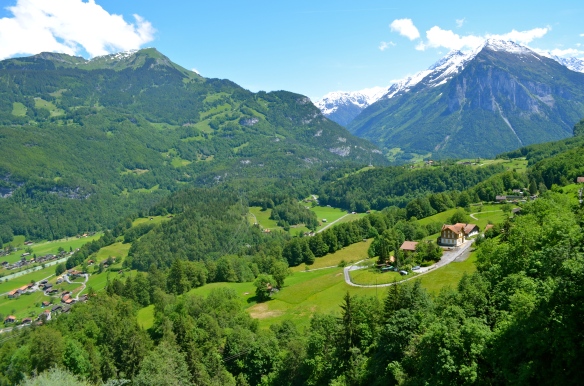 Heading back to the viewing platform, you have a great view of the main falls. Dramatic and impressive, Reichenbach Falls is actually a series of seven waterfalls.  You can hear them from far below and the noise increases the closer you get to the falls.  They are over 250 meters (820 feet) tall. 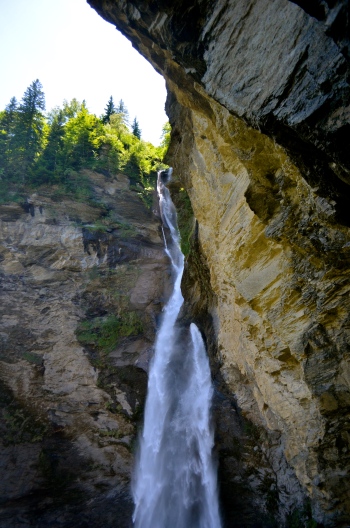 To see more of the falls, we hiked up to view some of the higher falls and see the main falls from above. 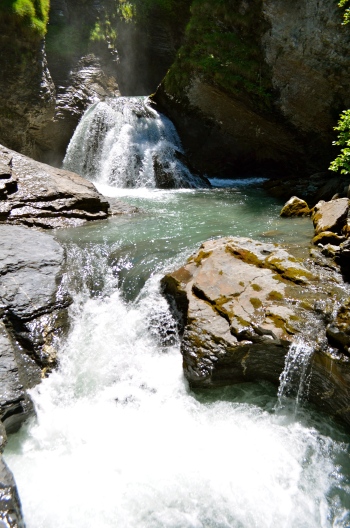 You walk over the falls on a bridge.  I was a bit scared and didn’t want to look down.  Curiousity killed the cat.  Thankfully, I survived one quick peak as I scurried across. 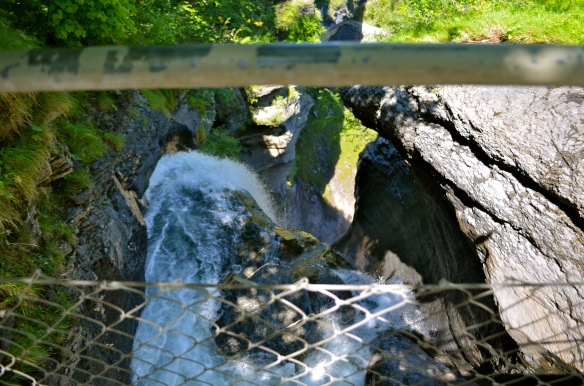 While beautiful and powerful, they owe their fame to fictitious events set there.  Sir Arthur Conan Doyle visited the area and found it an appropriately dramatic backdrop to stage the death of Sherlock Holmes and Professor Moriarty there. 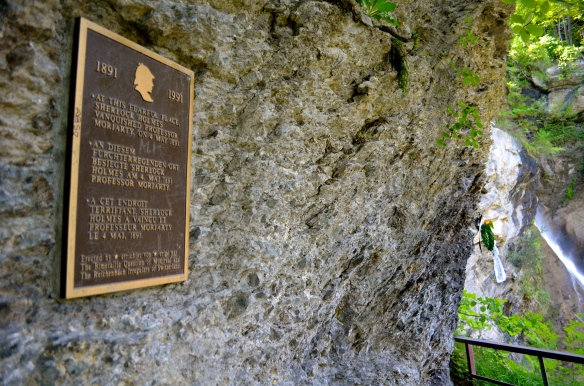 In the book, The Final Problem, Sherlock Holmes fought with his nemesis before both tumbled over the edge into the turbulent waters on May 4, 1891.  Every May 4th, Sherlock fans make a pilgrimage here to celebrate the his memory. 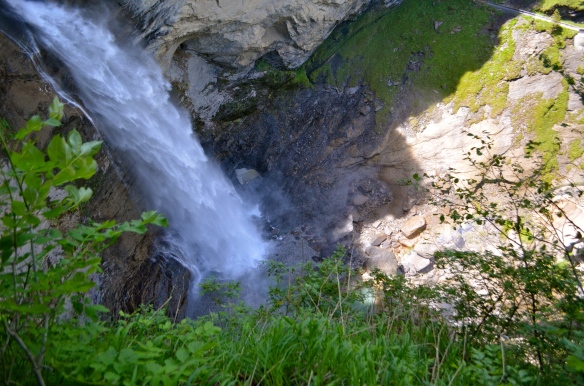 We hiked down to Meirengen on a path that skirted the falls.  It was beautiful, but I was glad that it was dry.  It seems like it would be pretty hazardous during heavy rains or snow melt.  The adjacent gulleys must become gushing rivers. 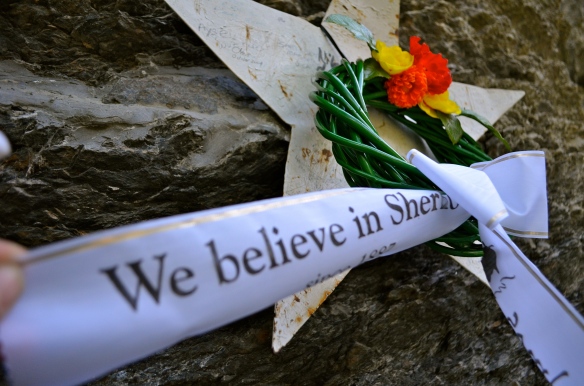 One of the benefits of hiking down was that we passed by the plaque marking the ledge where the fictional fight was set.  It also went by part of the main plunge.  From there, we had an outstanding view of the falls and of the star painted on a rock next to the fall to pinpoint the exact place of a struggle.  It marks the spot where Sherlock Holmes and his enemy Professor Moriarty went over the edge. 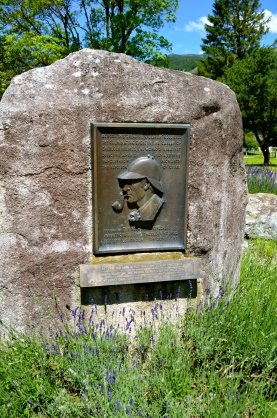 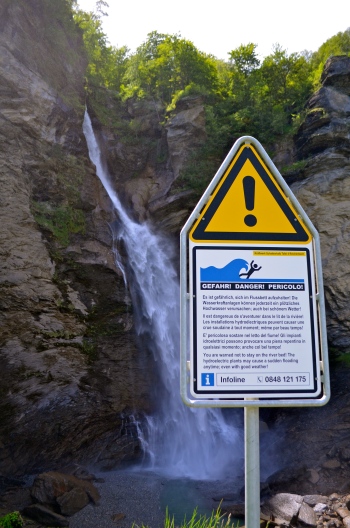 While steep, the hike down was picturesque and made me want to see more of the area.  On the way down, we stumbled across more anti-tank, Toblerone-style fortifications. 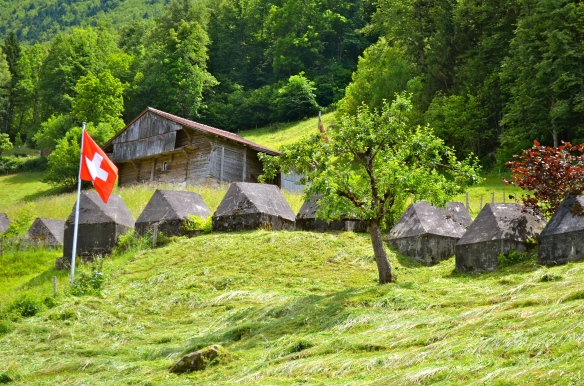 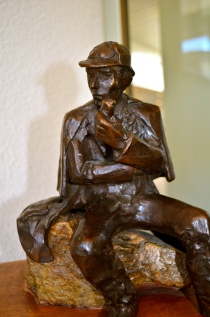 P.S.  If you have any good theories about how Sherlock survived his fall in BBC’s “The Reichenbach Fall,” I’d love to hear them.  I confess, I’m stumped.