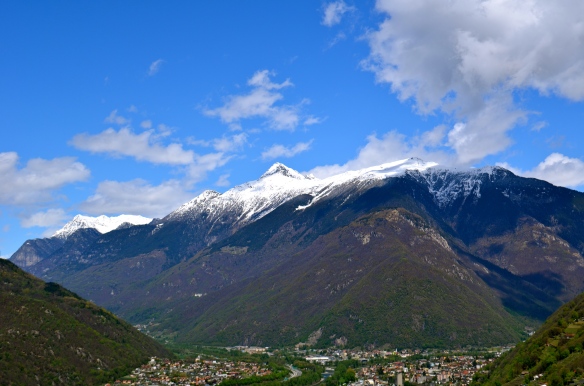 Bellinzona has been a fortress since Roman times due to its strategic location.  It is located on the valley floor at the base of the great alpine passes of the St. Gotthard, San Bernardino and Lucomagno (Lukmanier).

Romans built fortifications on the spot where Castelgrande now sits.   The nearby town of Bellinzona is named not for the Italian bella (“beautiful”), but for the Latin bellum (“war”), and this truly was a medieval war zone. Several castles in Bellinzona recall a pivotal Swiss victory in 1513. With this success, the Swiss gained a toehold in Ticino.

The Duke of Milan (the Visconti family) purchased Bellinzona in 1242.  They built a new castle atop the town.  Later, their allies, the Rusconi family of Como, built Montebello up the hill.

The Swiss, invigorated by their victory over the Hapsburgs at the Battle of Sempach and wanting to protect their newly won independence decided that possessing strategic Bellinzona on the other side of the Alps would reinforce their defenses.  They began their campaign in the 1420’s.  In response, Milan’s current rulers, the powerful Sforza family, reinforced the castles and built Sasso Corbaro even further up the hill.  They also built a massive chain of fortifications that extended across the valley.

It took the Swiss about 100 years, but they won.  In 1516, Bellinzona became part of the Swiss Federation.  The Swiss did their best to ensure that they kept it.   For the next 300 years, Swiss overlords oppressed and controlled the local population. 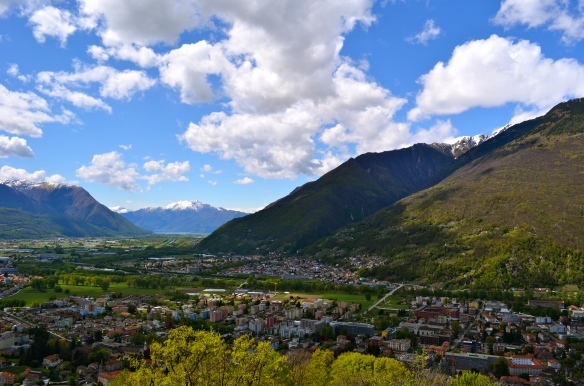 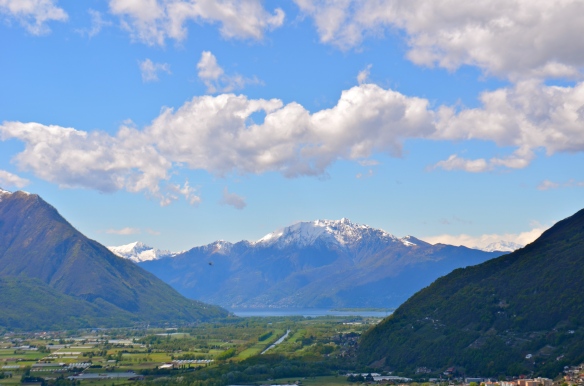 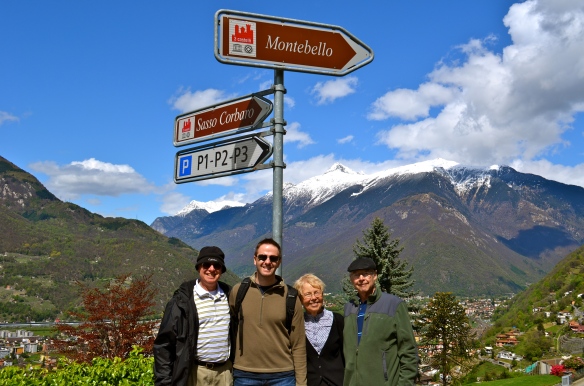 Once upon a time, Austria (the Hapsburg Empire) attempted to conquer the Swiss and marched into the mountains.  On July 9, 1386, they lined up to do battle with the Swiss at Sempach.  The Swiss mountain men were outmanned and had inferior weapons.

Winkelreid Monument in Stans near Rosenburg, courtesy of Wikipedia

For once, obsessions with having the longer spear paid off.  The Austrian’s pre-firearm spears were significantly longer than the Swiss’s short spears.  This made it impossible to effectively attack the Austrians and break their line.  Needless to say, the Swiss were not faring well and the outlook was bleak.

The soon to be legendary Arnold von Winkelried, knew that the Swiss would soon be defeated unless they made an opening in the Austrian’s line.  Bravely, he extended his arms as far as possible, rushed toward the Austrian line and gathered as many spears as he could grasp in his arms.    Legend says that he shouted, “take care of my wife and children” as he moved forward.   It was either that or “who the heck pushed me”?

His legend is in important part of Swiss history and it isn’t difficult to find memorials to Arnold Von Winkelreid’s bravery.