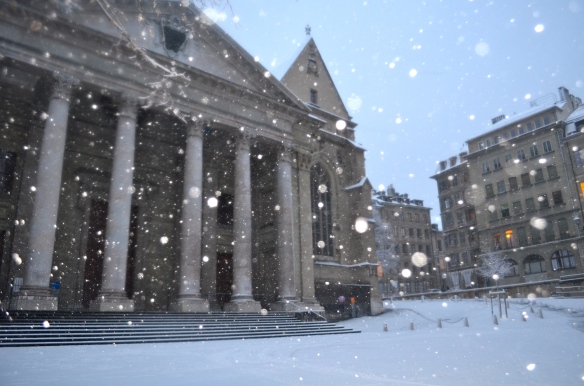 Henri Dunant and a group of Geneva in Geneva founded the International Committee of the Red Cross in 1863 (near the spot where this photo was taken).  Switzerland’s lack of land and natural resources forced its young men to go abroad as mercenaries to fight Europe’s wars.  Those that returned home were inevitably affected by what they had seen and experienced.    In 1859, Henri Dunant, moved by the human suffering he saw at the Battle of Solferino (in the Second Italian War of Independence) while on a business trip, wrote a book about what he had seen and began advocating for a neutral organization to care for wounded soldiers on the battlefield.  His work led to the First Geneva Convention and the establishment of what became the Red Cross. 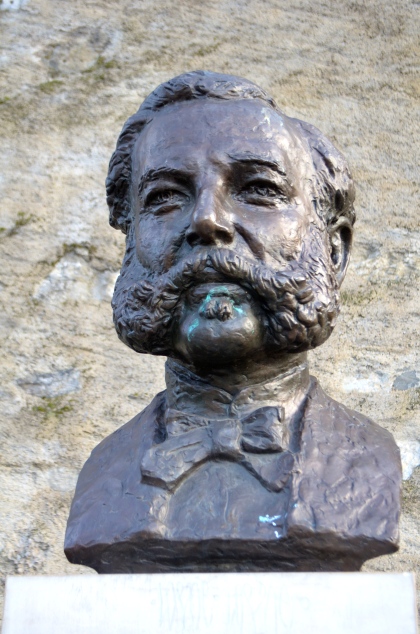 Henri Dunant won the first ever Nobel Peace Prize in 1901. This bust of Henri Dunant stands at the edge of Geneva’s old town, near Parc des Bastions.  Ironically, and perhaps fittingly, it sits on the spot where Geneva’s guillotine once stood!    Apparently when Geneva was part of France (annexed as département du Léman), all French cities required to have one (Geneva joined the Swiss Confederation in 1815).

Today, the International Committee of the Red Cross/the ICRC is located in Geneva. Although you can see the outside of the building, the museum is closed for repairs until sometime in 2012. Nevertheless, you don’t have to look far to see signs of the Red Cross in Geneva.

By the way, there is a reason the Swiss flag below looks like the Red Cross flag.  It is an inversion of the Swiss flag, which is a square with a white cross on a red background.   The First Geneva Convention in 1864, decided that to protect medical staff and facilities,  they needed a clear neutral sign on the battlefield. They chose the exact reverse of the flag of neutral Switzerland.  It was both easily produced and recognizable at a distance because of its contrasting colors.  A Swiss lady living in the US told me that she often tears with pride when she sees the Red Cross flag.  Being Swiss, she is very conscious and proud of what her countrymen started, its Swiss connections and the good that it has done.  Plus, it makes her think of home.

1 thought on “Why The Swiss Love The Red Cross”