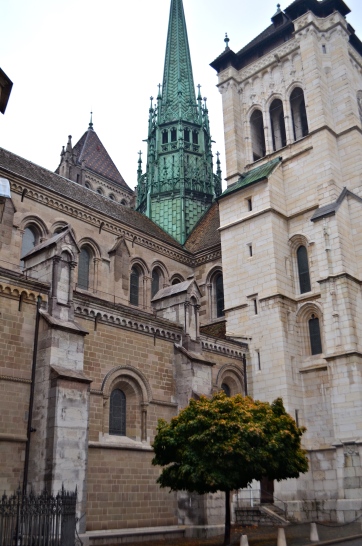 Geneva is old.  Really old.  The Allobrogians built a fortified settlement in Geneva that was conquered by the Romans in 120 BCE.   For me, pre-Roman = old.  Located at a strategic location between Lake Geneva (Lac Leman) and the Rhone, Julius Cesar came to Geneva on his Gallic campaign in approximately  58 BCE.   From the 1st to 4th centuries, they built a large building close to where the St.-Pierre Cathedral now stands . 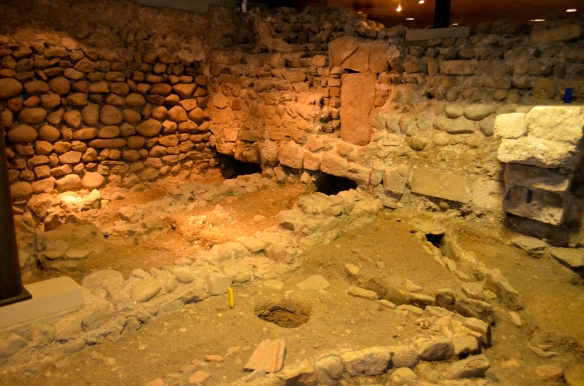 Under the St.-Pierre Cathedral, in the crypt is an archaeological site.  The foundations of those original buildings are still there.   You can see the layers of building.    In the photo above, you can see the original monk’s cells on the left.  Cozy. 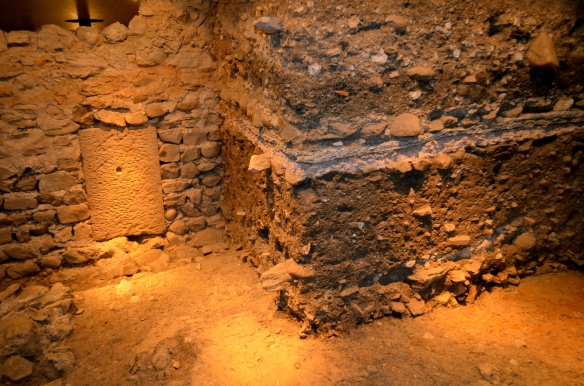 The site is massive, with many levels.  Some of our guests missed seeing an entire part of it when they took a wrong turn. 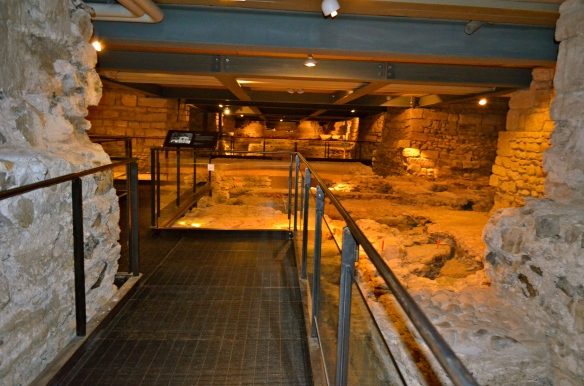 When I went back to look for them, I stumbled upon this gentleman (or lady).  The  hole is from the excavations searching for his or her head! 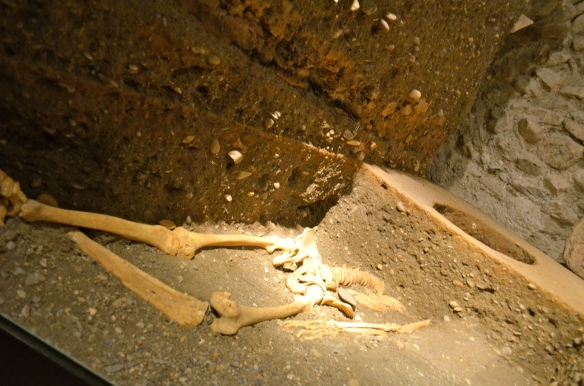 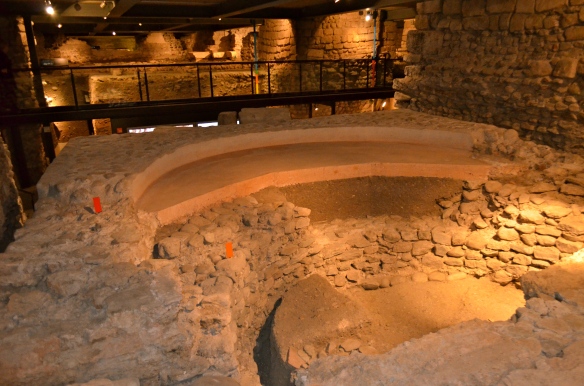 With so much history piled up in one spot, they have a handy color coded system to help you determine the age of what you are seeing.  The colored sticks correspond to different time periods. 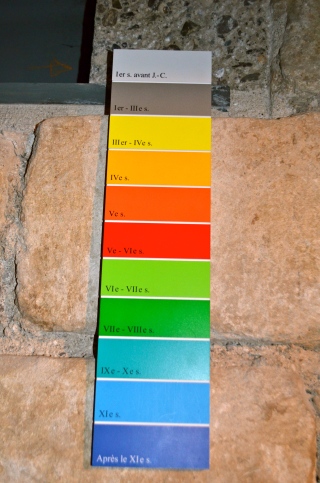 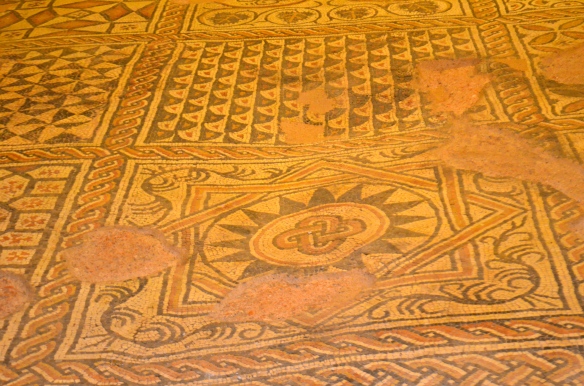 There’s plenty of evidence of the Romans, from mosaic floors to coins to wells. 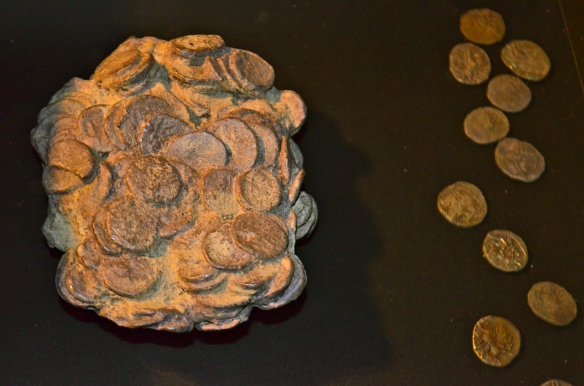 I don’t think the coins at the bottom of this cistern date from Roman times.  I tossed one in.  It couldn’t hurt. 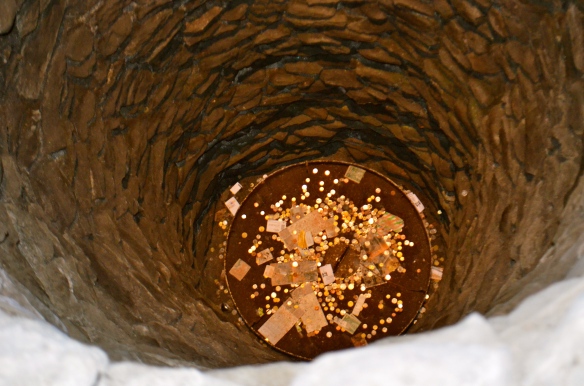 In the 4th–5th century, as Christianity spread across the Roman Empire and the  cluster of buildings on the hill began to include places of worship.  In 443, the Burgundians (a tribe of barbarians who invaded) took over Geneva. They made Geneva one of their capitals and the city contented to develop.  The site also developed encompassing multiple uses. 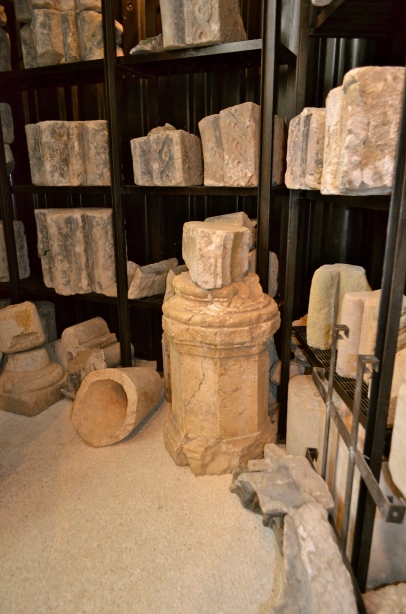 By the 9th century, cluster had grown significantly and undergone fundamental changes.  Three places of worship and annexes were built in the 4th–5th centuries.  These early christian churches have been extensively excavated.  In the 7th–8th centuries, a larger cathedral was erected.  In 1000, a monumental crypt was added and the choir extended.  The bishop built a himself a residence, a palace for him to live in.  Of course he did. 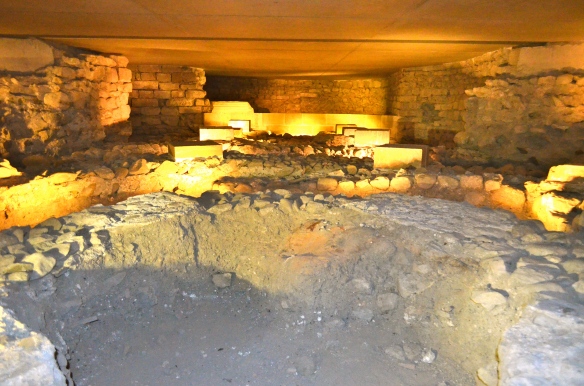 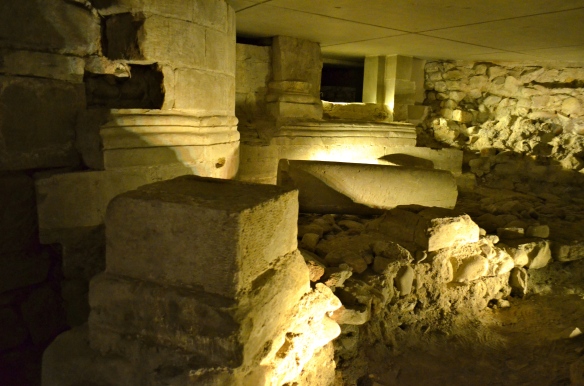 This is the crypt of the original Romanesque church.  That’s the end of this tale from the crypt.