When we were in Denmark, I decided to go see Louisiana (not the state), a modern art museum about 45 minutes outside of Copenhagen.  I found the train station, purchased tickets and was off.   At the third stop, a creepy guy got on and sat across from me.  It wasn’t long before he was mumbling under his breath.  He tried out various inappropriate words in different languages to see which got a reaction from me.

He also stared and moaned disturbingly at the paper with pictures of Denmark’s new female prime minister, Helle Thorning-Schmidt. She’s an attractive lady, but c’mon it’s the prime minister. Show some respect.

When he realized I knew English, he continued in English.  There weren’t empty seats so, I ignored him and kept my nose in my book.  Eventually it was too much and I asked him to “please stop doing that and be quiet”.  He said “no English, no Danish”.  The liar.  He knew a plethora of choice English words; I’d just heard them.  I was so focused on looking at my book and ignoring him that I missed my stop!  Uh-oh.

I got off (so did he by the way – yuck) and tried to figure out what to do.  Luckily, there was a 7-11.  A 7-11?  Yes a 7-11, here they also serve as train stations/ticket agents in smaller towns.  A young woman was behind the counter.  I explained to her what had happened and was sure to note the words he had said about her newly elected prime minister while leafing through the paper.  She got someone to cover for her, took me to the conductor, explained what had happened and got me a free ride to the museum!  I couldn’t have been more grateful. Take my word for it, the Danes are nice. Unbelievably nice.

When I saw the museum, I was blown away.  It was amazing.*

*Everyone has his or her “things”. Modern art and Danish design are two of mine. I still think that anyone would be impressed by and enjoy this place.  It’s got a beautiful seaside setting, nice cafeteria and thought-provoking art.  If you take a guided tour (or can subtly follow one as I did), the guides do a great job of explaining what you are seeing and putting it in context.

See what I mean, thought-provoking? 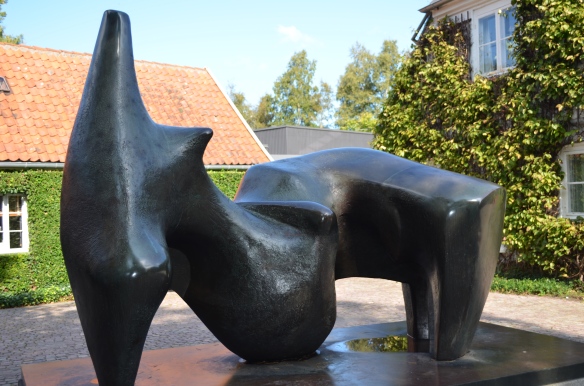