Dubai is famous for its malls.  There are over 60 of them and they are immense.

While I didn’t see much in the stores themselves that surprised me and couldn’t find in New York City, the experience was amazing.  People in Dubai don’t go to the malls just to shop, they go escape the sweltering weather, socialize, eat and entertain themselves.

The Souk Madinat at the Hotel Jumeriah has artificial waterway that reminds me of The Venetian in Las Vegas.  Since it’s in Dubai, of course it’s bigger. 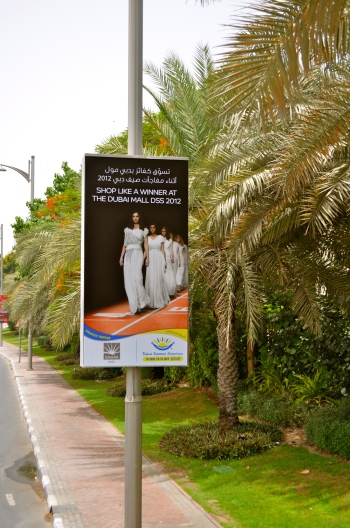 The Dubai Mall has about 1200 stores.  There are towns a few miles from where he grew up with fewer people.  It has an Olympic-size ice-skating rink!  Hockey anyone?   If that isn’t enough to draw you in, it also has a four-story waterfall, a huge aquarium, indoor theme parks, and a fashion catwalk.   The aquarium is enormous and breath-taking with lots of fish that include stingrays and sharks.  It holds the Guinness World Record for the largest acrylic piece used in an aquarium. 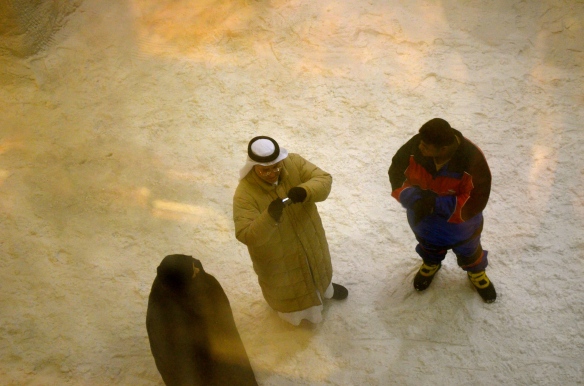 The Wafi Mall has a glass pyramid, kind of like the Luxor Hotel in Las Vegas.

I visited the Mall of the Emirates because I had to see its indoor ski slope with real snow.  When I first heard about this, I couldn’t believe that someone would think to build an indoor ski resort.  For me, part of the fun of skiing is being outside. 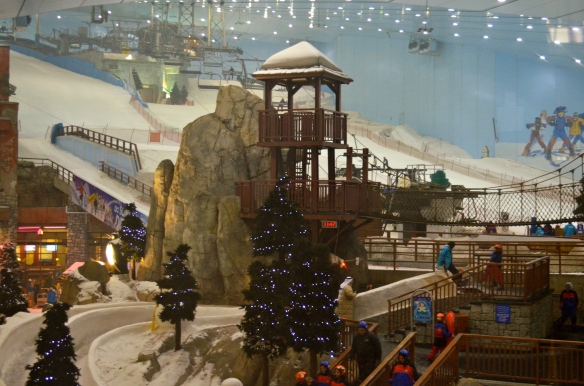 Ski Dubai features five indoor ski runs, of varying altitude, incline and difficulty.  I didn’t give it a go because I figured the skiing wouldn’t be better than in Switzerland, but regret not doing it.  They rent you everything you need, parkas, boots, skis and snowboards… I’m not sure if they rent helmets, but wouldn’t doubt it. 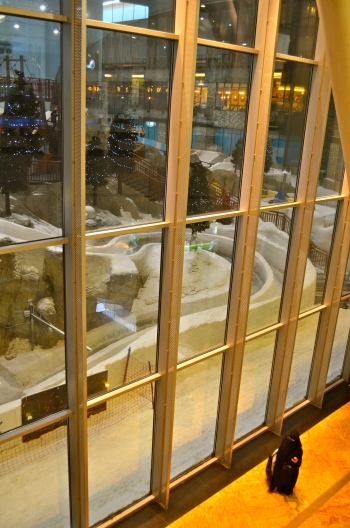 It was fun watching kids running around, playing in the snow.  The Magic Planet, a two-story arcade, was lousy with kids fresh out of school and high on sugar.  I had to play.

Another reason I went to the Mall of the Emirates was that I’d heard you can get outstanding coffee drinks at the Armani Coffee Bar.  It did not disappoint.  My coffee drink was amazing and unlike anything I’d ever had.  It was like a super-refined latte milkshake.  The interior lights continually change colors and the Armani interior was elegant.  No surprise there.

As I was leaving, I saw something that fascinated me, a donation machine.  It allows you to give toward food, the disabled, orphans, treatment, house appliances (?), zakat, alms, constant alms and penance.  Does it mean that you can, literally, pay for your sins? 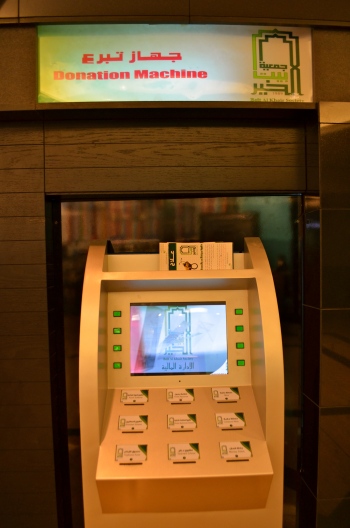