Three roads link Nice to Monaco.  They are called “Les Trois Corniches” which translates to the three cliffs or cliff roads.  The word comes from the word “cornice,” the decorative frieze that runs on top of buildings.   They are some of the world’s great drives.  When the rain and cruise ship passengers chased us out of Villefranche, we decided to drive the Grand Corniche.  What better time to take a drive on dangerous, cliff side road than in the rain?

The Low Corniche running out to the peninsula to St. Jean-Cap-Ferat from Villefranche-Sur-Mer 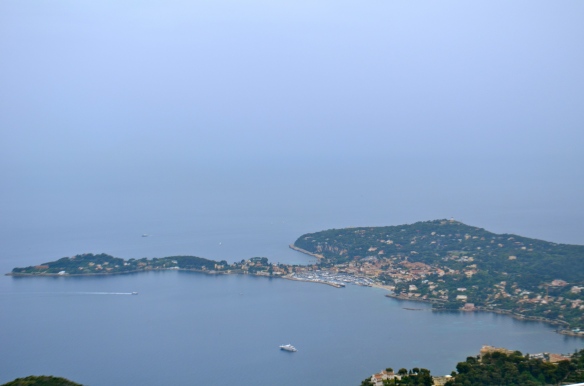 The peninsula with the Low Corniche from above

The Low Corniche (La Base Corniche or Corniche Inferieure) runs along the water, 50 meters above the Mediterranean.  It runs through Villefranche, past the entrance to the Cape Ferrat (known as the peninsula of billionaires), into Beaulieu-sur-Mer (chic Belle Epoque resort town), into Eze-Sur-Mer (from which you can hike up the Nieztsche path to the medieval hill town of Eze) and Cap d’Ail before arriving in the Principality of Monaco.

View from the Moyenne Corniche

The Middle Corniche (La Moyenne Corniche) is higher, culminating at 472 meters above sea level.   It offers impressive views of the sea and the towns above.  We took it out of Eze, going over the viaduct.  The Viaduct of Eze is known as the Bridge of the Devil.

The Viaduct of Eze on the Moyenne Corniche

Built in the early 20th century, the Moyenne Corniche is the newest of the three roads.  Even then tourists were causing congestion on the Low Corniche. 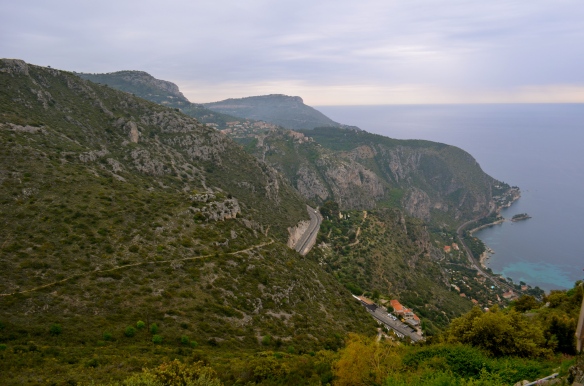 The Moyenne and Low Corniches from the Grande Corniche

We took the Grande Corniche out and drove the Middle Corniche back.   It wasn’t easy to stop for pictures though as we had to cross a lane of traffic to pull off and then get back out.  I can’t believe I’m saying this, but luckily it rained (so there wasn’t too much traffic).  It would be difficult, if not impossible, to stop like that on a busy day.

From Eze, you can see the Tete de Chien promontory which dominates Monte-Carlo.  Princess Grace of Monaco (Grace Kelly), was killed when her car went off a cliff on the Moyenne Corniche near there in 1983.

The High Corniche (La Grande Corniche) is the highest of the three with a height of 500 meters above the sea.  It has staggering views and a historical pedigree.  It is the site of the Via Aurelia, the road used by the Romans to conquer the territory to their west (aka France).  La Grand Corniche was built by Napoleon alongside of the old Roman road.

Several movies have been filmed on the Grande Corniche.    Alfred Hitchcock filmed parts of “To Catch a Thief” starring Cary Grant and Grace Kelly here.  In some scenes, you can see Eze in the background.  The James Bond film Goldeneye starts with a car chase on the Grande Corniche.  Pierce Brosnan as James Bond chases Russian female fighter pilot Xenia Onatopp‘s Ferrari, in his Aston Martin DB5.  It is also a popular spot to film car commercials (but so is Detroit).

Yep. That’s it way up there on top.

From the Grand Corniche, you can see some seriously expensive homes.  I’m pretty sure that this is Villa La Leopolda.  Built by King Leopold of Belgium (allegedly for his mistress), owned by the Agnelli family (of Fiat fame and money), Bill Gates and then by the Safra family, it was put up for sale by Edmund Safra’s widow, Lily.  Russian billionaire, Roman Abramovich, pulled out of a deal to pay $500 million dollars for it after legal troubles with the French government, losing his $36 million deposit.  Oops. 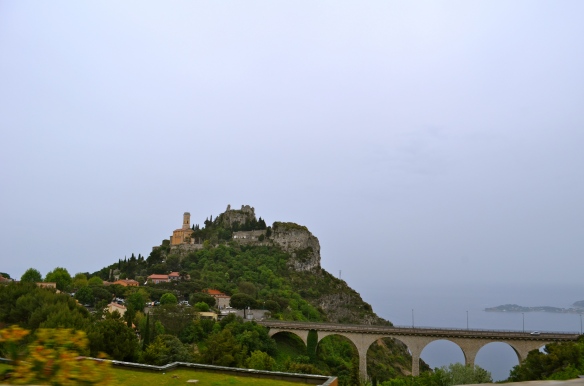 The Grande Corniche is so high and steep that it doesn’t go through many towns (only the hilltop village of Roquebrune).  There are hairpin turns and low guard rails (if there are guard rails).   It wasn’t a relaxing road to drive, but it was pretty freaking cool.