You know it’s the UN because if you squint, you can see the UN flag on top

We recently had some visitors in town (yippee).  They were the perfect excuse to tour the United Nations in Geneva, the Palais des Nations.  Guides update visitors on the current activities of the United Nations, tell its history and answer loads of questions.

The United Nations in New York hosts the legislative body.  Geneva host tons of meetings.  I’m guessing it may be easier for diplomats and delegates from certain countries to get into Switzerland than in the US.  They have hundreds of meeting rooms to host over 2700 meetings they host every year.  Many of them look like the one above.   All proceedings are translated into the six official languages (Arabic, Chinese, English, French, Russian and Spanish) using state of the art 70’s technology like this.

Miquel Barcelò massive sculptural installation decorates the domed ceiling of the Chamber XX of Human Rights and Alliance of Civilizations Room. Although it was controversial for its $23 million price tag footed by Spain, everyone seemed to think it looked pretty sweet.  I wanted it for our apartment. 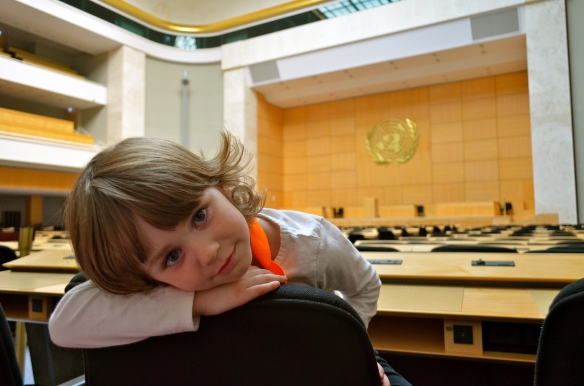 The Assembly Hall, the largest room in the Palais des Nations.  You can watch it on TV.  You are probably still more familiar with the large hall at the United Nations in New York from television and movies. 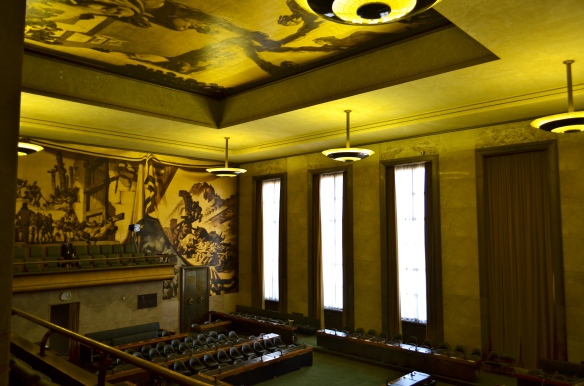 The Council Chamber, formerly housed the League of Nations and has stunning murals by José Maria Sert.  Many important negotiations have taken place in this room.  This room was home to the League of Nations and has hosted many tense negotiations.  It has two separate entrances so antagonistic negotiants can enter and leave at the same time.  They can also move the furniture around into a “V” formation (the tables in the other rooms are bolted into the floors) so that necociants don’t have to look at each other.

Go figure. Patek Philippe is the official clock of the UN in Geneva.

The gift shop is really cool and worth a visit.  I bought a board game about Switzerland in French and English!  You can also purchase and mail post cards from there (they will go out with the official UN stamp).

Gifts presented by various countries to the United Nations Office at Geneva are on display.  They are pretty sweet.  Germany gave this Günther Uecker picture made from nails. 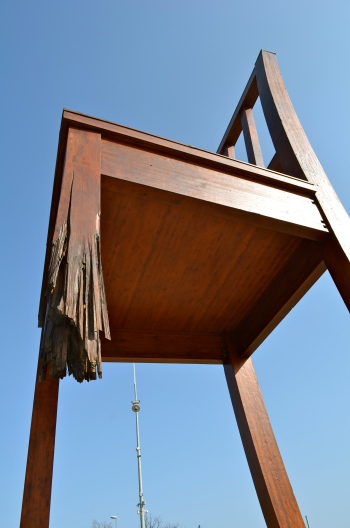 Out in front of the building (at the Nations TPG public transit stop) is the famous Broken Chair sculpture by Daniel Berset.  The chair’s fourth leg is broken off, leaving shards of jagged wood, yet it doesn’t tip.  The damaged leg symbolizes the suffering of land mine victims.    I run by there often.  Between the chair, the fountain and the demonstrators that are usually around, it’s always interesting. 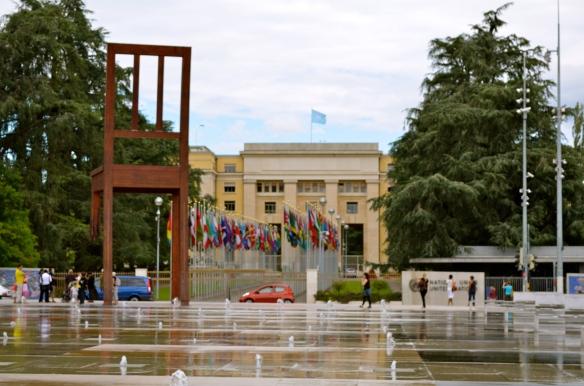 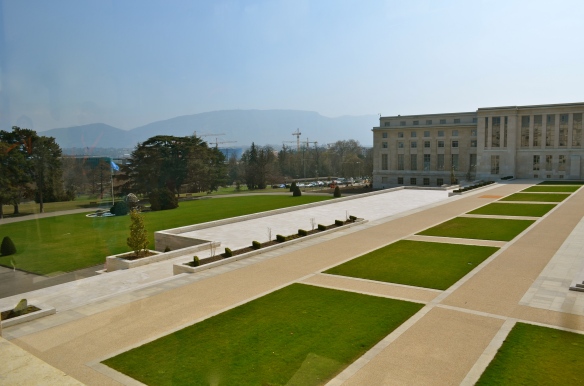