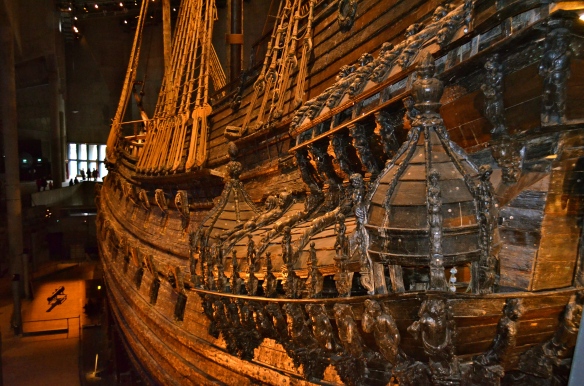 The Vasa Museum in Stockholm houses the Vasa, a sunken 17th century ship.  Finished in 1628, the Vasa was top-heavy and too narrow for her depth/weight (the king dictated the measurements and no one was about to correct him).  The Vasa sank in Stockholm’s harbor, not even a mile into her maiden voyage!   Giant oops.   333 years later, in 1961, she was salvaged almost fully intact. 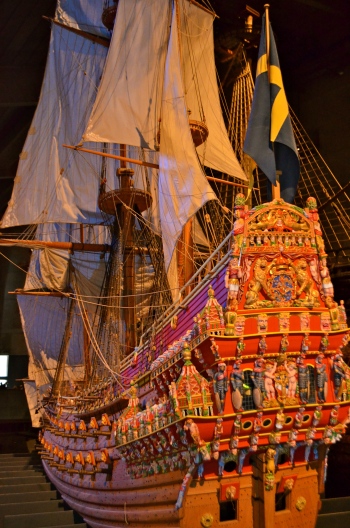 How the Vasa looked when she set sail

King Gustav Adolf built the Vasa for a major role in the Swedish navy.   Sweden had been at war with Poland since 1625 and embroiled in the Thirty Years’ War.   To advance its interests, Sweden needed a strong navy.  Sweden had recently lost twelve boats.  They desperately needed some new, fancy ships.  Unfortunately, the Vasa’s designer died without leaving written records, the king changed some of the specifications and the completion date was looming.  It was a rush job. 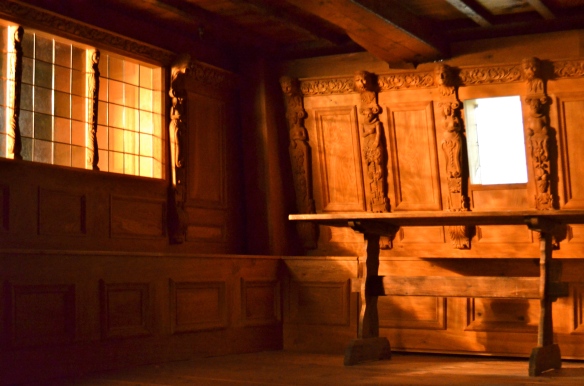 Recreation of the interior 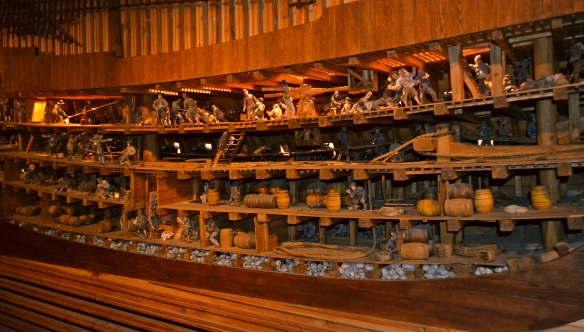 How the ship’s interior was organized

Fanfare surrounded the Vasa’s launch.  Hundreds watched from the shore.  Crew members’ wives and children were on board for the first leg of the journey to an island with barracks just outside the bay (where soldiers would board the ship).  Small boats towed the Vasa from the dock.  After firing a farewell salute, she tilted took in water and promptly sank.  Small boats in the harbor picked up most of the 150 people on board, but about a third went down with the ship. 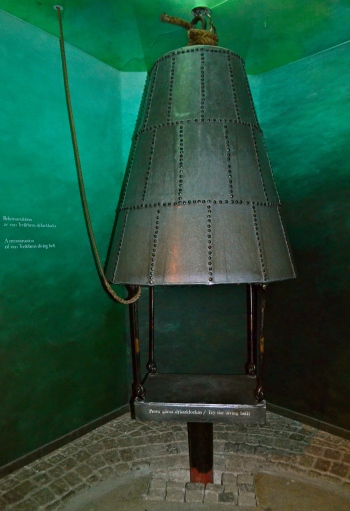 This diving bell was used to salvage some of the cannons in the 1600’s! 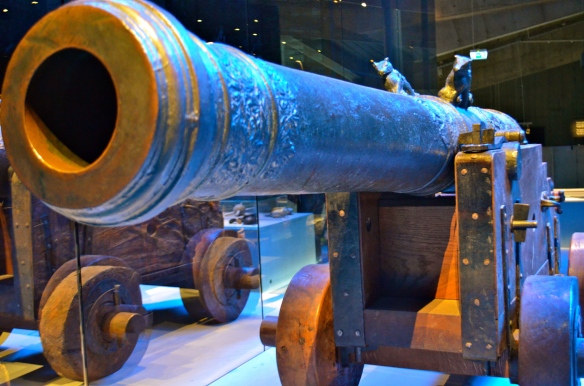 The captain was thrown in jail and an inquest to determine the cause of the sinking was immediately undertaken.  It wasn’t long before it became clear that the king himself did much of the decision-making.  King Gustav Adolf determined the measurements, added a second gun deck and larger cannons.  The inquest instantly dropped and crucial paperwork vanished.  Hmmmm. 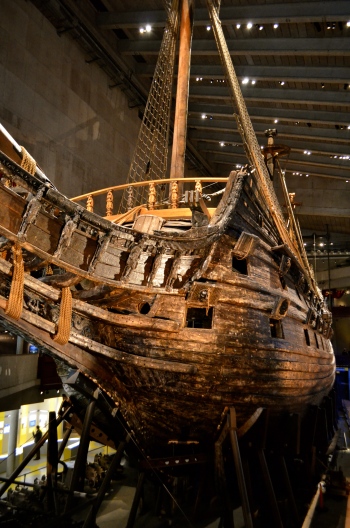 Today, the Vasa is the centerpiece of a colossal museum.  The real star of the museum is the Vasa itself.   The enormous strategically lighted ship is the first thing you see when you enter the colossal, dimly lit main area.   Prepare to be awed.   It is enormous and it’s intricate timber carvings are impressive.   You can view it from every angle and it is extraordinary.  Sorry, the pictures don’t do it justice. 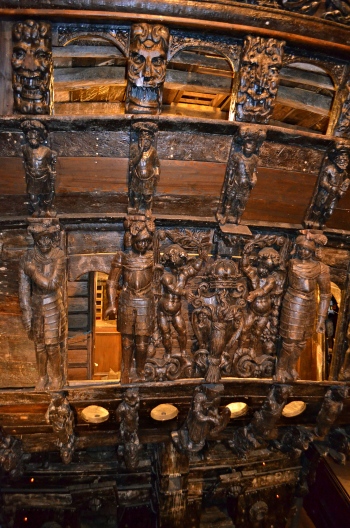 Normally, sitting around looking at boats is not my idea of a rockin’ good time and he gets seasick.  It doesn’t matter if boats or history is your thing; it is one of the coolest time capsules ever.  Thousands of artifacts and the remains of at least fifteen passengers were recovered.  Clothing, weapons, cannons, tools, coins, games, dishes, cutlery, food, drink and sails are all on display.  The museum does an excellent job of displaying these items and giving them context.   Without lecturing or boring visitors, the museum educates them about naval warfare, shipbuilding techniques and everyday life in 17th century Sweden. 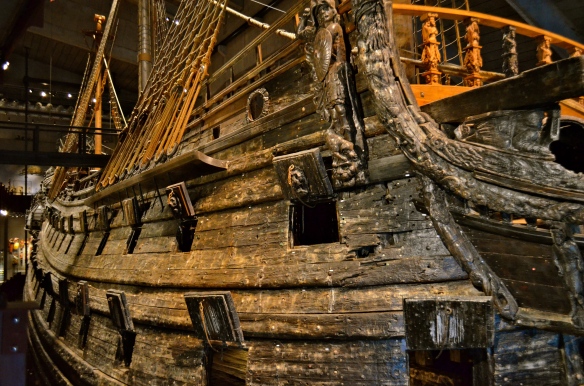 95% of the original ship survives.  There are several reasons why the Vasa is in such good condition: 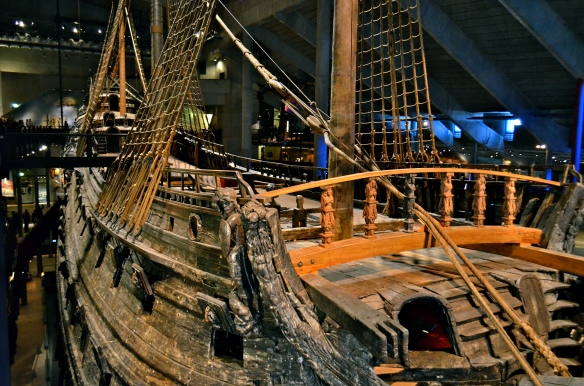 We weren’t the only ones interested in the Vasa.  It is Scandinavia’s most visited museum.  While we were there, we saw the King and Queen of Sweden, Prince Charles and Camilla Parker-Bowles.  They actually got to go on the ship.  Lucky ducks. 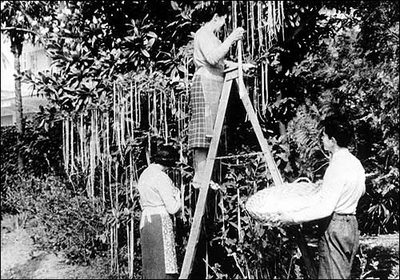 Courtesy of the BBC

After a bit of research I determined that they celebrate April Fool’s Day in Switzerland.  Although it isn’t a holiday like Swiss National Day, St. Bartholomew’s Day, Escalande, Fasnacht or Tschaggatta, so government offices and schools are open (or would be if it fell on a weekday), they do play practical jokes.   I hope you forgive me for my last post on the southern Switzerland’s spaghetti harvest, it was a bit of an April Fool’s Day joke.  Sorry.

One of the most famous April Fool’s Day Jokes involves Switzerland…in a way.  The British news show, Panorama, broadcast a three-minute news segment about a bumper spaghetti harvest in southern Switzerland on April 1, 1957.   The previous post was the story verbatim.  People swallowed it hook, line and sinker.   It generated an enormous response and became one of the most popular April Fool’s Day hoaxes of all time.

In honor of April Fool’s Day, I thought I would explain how they came up with the idea and managed to pull it off so successfully.  The spaghetti harvest prank was the brainchild of Charles de Jaeger, a cameraman for the BBC and jokester.  Growing up, one of his teachers told the class, “boys, you’re so stupid, you’d believe me if I told you that spaghetti grows on trees.”   How could he not turn that into a joke on film?  He pitched the idea to several bosses over the years with no success.

In the 1950’s, Panorama was the BBC’s leading news program with ten million viewers.  It aired every Monday night.  When de Jaeger realized that April Fool’s Day fell on Monday night, he shared his idea with the writer David Wheeler who loved it.  They convinced Panorama’s editor, Michael Peacock, to produce the segment (with a budget of only £100).  Peacock agreed, but insisted it be kept a secret, fearing the BBC would veto the project.

When they went to Switzerland to film the segment, it was cold, misty and trees hadn’t blossomed.  They traveled to temperate Lake Lugano in Italian Switzerland where there were evergreen Laurel trees.  They hired some local girls in their national costume string 20 pounds of uncooked spaghetti from trees at a hotel in Castiglione.  He filmed climbing ladders carrying wicker baskets, filling them with spaghetti, and laying it out dry in the sun.  He also filmed his actors eating a spaghetti feast.  The footage was then edited into a three-minute segment with background music.

At the end of Panaroma’s April 1st broadcast, the show’s highly respected, eminently dignified and solemn anchor, Richard Dimbleby, introduced the segment, adding the necessary gravitas.  He made a great straight man, without cracking a smile started the report with “And now from wine to food. We end Panorama tonight with a special report from the Swiss Alps.”  They then showed the prepared footage.  At the end, Dimbleby closed the program with, “Now we say goodnight, on this first day of April,” emphasizing “this first day of April.”

The BBC immediately began receiving calls about the segment.  Some were complaints about such frivolity on a news program, some were to settle arguments about the origins of spaghetti,  and still others were inquires about where viewers could purchase their own spaghetti bush.

The hoax worked for several reasons:

Even the head of the BBC Ian Jacob, fell victim to the scheme.  Nevertheless, like much of the British public, he was a big fan of the hoax.   It became legendary and Johnny Carson even rebroadcast it.  You can see it for yourself by clicking this link to YouTube.

In case you were wondering, to start your own spaghetti tree, place a sprig of spaghetti in a tin of tomato sauce and hope for the best.